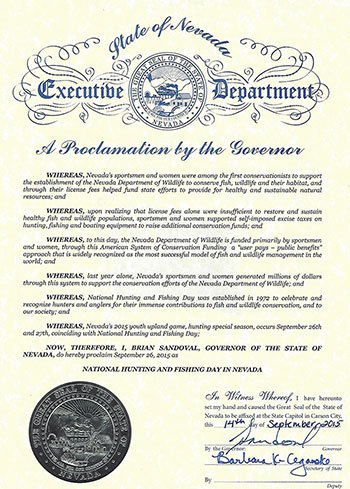 In an effort to help bring attention to the contributions that hunters and anglers bring to conservation efforts, Governor Brian Sandoval has declared Saturday to be National Hunting and Fishing Day in Nevada.

First observed in 1972, the day was created as a day to enjoy the sport of hunting and fishing and is meant to recognize that most hunters and fisherman are responsible and enthusiastic naturalists.

In the Governor’s proclamation he declares "Nevada’s sportsmen and women were among the first conservationists to support the establishment of the Nevada Department of Wildlife to conserve fish, wildlife and their habitat, and through their license fees helped fund state efforts to provide for healthy and sustainable natural resources."

NDOW invites everyone to get out and enjoy the outdoors this weekend. Youth hunts for chukar and Hungarian partridge, gambel’s quail and rabbit are this Saturday and Sunday. The hunts are open to kids 15 years of age or younger. Youth must be accompanied by an adult who is at least 18 years old. Duck season will also open on Saturday in Elko and White Pine counties.

"This special day appropriately recognizes hunters and anglers and their tremendous contributions to conservation in our state," said Tony Wasley, director for NDOW. "Hunters and anglers provide the core of our funding. Without the fees from the sale of licenses, tags and stamps, as well as the excise taxes paid on hunting and fishing equipment, it would be impossible for us to do our job."

National Hunting and Fishing Day honorary chairs have included Jim "Catfish" Hunter, Terry Bradshaw, Arnold Palmer, George Bush and Jeff Foxworthy. This year features Jim and Eva Shockey. Jim Shockey is an outdoor writer and the producer and host of Jim Shockey's Hunting Adventures and Jim Shockey's Uncharted on the Outdoor Channel. His daughter Eva is an avid hunter and the co-host on her father's shows.