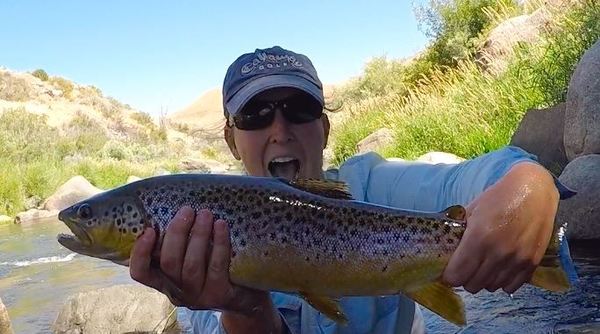 The heat is on!!! So here's the gist..GET A THERMOMETER if you are going to be doing any Catch and Release!

Some great conversations this week with people with questions and comments on water temps, some on stillwater, some on moving water, some even on aquariums! It's all very interesting, how we, as fishermen look at the world and yet, a really good fishermen doesn't think like a fisherman.. but more like a fish! Is the temp you're taking surface? Is the thermometer in the water for a full minute on the bottom where the fish hang? How long if you're fighting a fish in deep water versus the top water does temperature matter? LOVE these conversations, and look forward to more! (if you missed the temperature/oxygen/nitrogen conversation, take a look at last week's Fishing Outlook)

A reminder, you would think with all this heat the mosquitoes would burn off... the jokes on us.. those pesky cretins are still out there, be sure to stock up on your DEET/mosquito repellent.

Some waters that we've gotten reports on that we don't typically report on: Crowley is doing well, midges of course. Wolf creek for C &R on the little wilds is a fun and cooler area to fish, Upper Twin Lakes late in the evening from shore with buggers and damsels.

E. CARSON: CA: Flows: average 113 cfs this week, just a little below median flow. above Hangman's (along hwy 89/4) Not much has changed since last week. Buggers in olive or black, Caddis are hatching, PMD's and BWO's of course the hoppers are all over the place and also the ants. I'd certainly skate a stimulator in yellow or orange. Para-madam X in yellow or chartreuse. Nymphing: micro mayfly, EC caddis, PT, hare's ear, little yellow stone, caddis pupa, san Juan's. Catch & Release section (downstream at Hangman's Bridge) , Like the water above, it's nice flows. The reports that we've gotten is that it's slow.. it's not that the fish aren't biting, it's just that there aren't a hell of a lot of fish there! Start watching for the snakes trying to cool off in the water Same bug patterns as above.

E. CARSON: NV: Flows average: 106 cfs, about 70 cfs below median. NDOW stocked it this week for an event, and either the water took a very hard turn in warmth and were inable to find a cool hidey hole or they were shocked due to the tank/vs river water temp, and we've got some dead fish floating near the bridge. Nice flows, and clear. Being clear, start being a little more sneaky (yes, this is a fishing terminology :) Dead Drift Red Copper Johns, Golden stones, little yellow stones, zebra midges, or San Juans. Dry fly action should always include a dropper of a zebra midge, hare's ear, caddis pupa, make it a stimulator or grasshopper a cripple caddis or ant. It's almost time to start venturing up the further reaches, they'll hit s dry nicely early in the morning and late in the evening. Remember to release wilds (par marks (God's thumbprints along lateral line) and the brown trout tokeep the populations going!

W. CARSON: Flows average: 24 cfs, running about 20 cfs below normal, and should receive a bump in flows from storage above soon.. The Carson Rivers are at this time of year, considered 'irrigation canals. One week for watering for the CA side, the next week for the NV side.. with these lower flows, it certainly looks like the CA side. This was stocked pretty well last week. Walk away from your vehicle to get into some of the left-overs that haven't been taken out. Maybe even a wild or two on an ant pattern.. those little wilds are FAST! A note, if you pick up a wild trout, please let it go, If using bait, just cut the line, no longer are viable trout being stocked. Dries: Elk Hair Caddis, Stimulator , Stone, adams in a 16, Pale Morning Dun mayfly size 14. Nymphs: Hare's ear, PT, Prince nymph (always a go-to!), zebra midges, WD-40.

PLEASANT VALLEY CREEK: Flows 24 cfs Buggers dead drifted and stripped.. Olive produced well, snow cones, caddis pupa, PT's Hot Pink san Juans or a drop with a Tequila Twist (if you're a tier the link for the YouTube directions is https://youtu.be/S8iVDIZr8Ng and heck, throw a big ugly!. Hoppers did well for clients with guides. If interested in fishing the only Private water in Alpine County, call the shop for your reservation!! Guides are available and your rod fees are discounted if you book with a Staff guide. 775-781-7112 .

E. WALKER: NV (Rosaschi Ranch): Flows 143cfs: flows about 50cfs below median. CATCH & RELEASE, NO BAIT, BARBLESS NO KILL. TAKE TEMPS after 9 am... off at 69 degrees. You know, maybe this time of year, have a little fun, use a pair of dykes and cut the hook off completely.. go out see what will hit your fly.. pull it out of their mouth,, no harm, no foul and they won't be stressed from fighting in warm water and you still get to fish! Guides available for EARLY, EARLY morning ½ day trips. Dead drift light colored buggers (light olive, white),natural zonkers, clousers, copper johns, hare's ear, rubber legged stones, little yellow stones, red or black zebra midges, bubbleback midges, Hot Pink bugger, Tequila twist.

E. WALKER: CA Flows 140 cfs, about 50 cfs below median: TAKE TEMPS after 9 am... off at 69 degrees. CATCH & RELEASE NO BAIT, BARBLESS (Special Regulations)Flows have been steady. The head wall did have some nice fish in it, again, pick your side. Buggers, PT,s Chrino's , and midge on a heavy rig. Damsels are coming off with this heat and a damsel nymph is a good one to have on your rig. A good idea is to get the CLEAR glow in the dark Thingamabobbers, you'll get use to finding it. The fish won't move off it as easily. Nymphs they weren't too picky about, ADD, ADHD, black brassies, nitro caddis, bubble back, hare's ear.

WEST WALKER : CA: Flows average: 136 It's looking very nice. Stocked by Mono County a week ago for the How Big Is Big contest in Mono County with pretty nice trout. Pickel Meadows is still pretty busy, perhaps hit aht area with a dinner picnic when everyone else goes home for the evening. (REMINDER: Release the Browns, if you want to see one in the future!) Yellow Crystal bugger is a go to on this water, (Walker Bugger), red/black or green copper johns, hare's ears, Flashback Pheasant tail and rubber legged stones. Dries: Stimulator, Royal Wulff, Caddis, Adams, EHC.

WEST WALKER NV (Hoye Canyon): Hoye Canyon is no longer open to the public. Only fishing on the West Walker Nevada access is Wilson Canyon on 208 south of Yerington.

HOBART OPEN: It is slowing down just a bit, fish are going a bit deeper due to the heat. Damsels, PT's zebra midges, red or black, mosquito's, black ants. For Directions for a 4 x 4 vehicle: http://www.ndow.org/Bodies_Of_Water...

PYRAMID LAKE Opens in a little over 60 days!

TOPAZ: Topaz Lake is still good and high. Reports from Float Tubers at the inlet area had great reports of trout all over 2 pounds. The bass are starting to show up,'big unglies', buggers, dead drift cray fish. THE CARP are still in the shallows, not in the high numbers a few weeks ago, but can still be targeted in that area. (if you haven't done carp fishing, come in and ask.. it's a hoot!) Olive buggers, damsel nymphs, Carp flies, crayfish patterns and a very stout 8 weight rod.
If fishing the LAKE of Topaz, a CA (OR) an NV.. if you turn to do the outlet (Topaz Canal) you must have a NV license. As is, turning to the inlet, you would have to have a CA license. Be informed the Canal area is now marked NO Trespassing about 2 miles from head wall (It is private property, see report West Walker, NV).

SPOONER: A PERSONAL NOTE: catch a chub, KILL IT.. This lake has become so over populated with chub, that the trout there are competing for food. Damsels, zebra midges, copper johns, PT's buggers in white, olive, zug bugs, princes. If you see lips: Para Adams, Trico. Just want to catch ANY fish (chub) use a zug bug... it's a guarenteed take.

HEENAN: Opens in a little over 30 days!

INDIAN CREEK: It's slowed down. Fish are going a bit deep, if fishing from shore, I'd throw a damsel early in the morning. If in a float tube, you'll do better, and start using an intermediate or sink tip. Finger crawl your nymphs. Buggers in olive, black and white. Red zebra midges, Blood midges, small Maholo's, hares' ear, damsels, sheep creek specials.
(PRO HINT: Strip to the tune of the theme to Bonanza, to vary the movement of the streamers)

KIRMAN: It's still a bit slow. We may have lost fish due to last year's low water and then a Winter kill. A few fish have been caught. Watch for rattle snakes on the way up and out. Scuds, zugs, damsels, olive buggers, chrino's to the weed beds.

TRUCKEE Flows in Mogul are about 274, absolutely fabulous flows for a walk and wade. Fishing pretty well on the California side. And up higher on the NV side, lots of the LCT's stocked by USFWS are being caught. Stones, Green Drake nymphs (Olive hare's ear, in a pinch) San Juans , Rainbow warriors. If you're adventurous, throw a big ugly Rabbit strip fly to clean up a run or hole. It was hit pretty hard with 2 years of hard drought and really warm water temps. There are some survivors and that's good. If we want the repopulation of brown trout to be there, let them go (tell your spin or bait buddies) FWS dumped in a big load of Little LCT's.. good fodder for the browns and big 'bows.

Did you know that The Angler's Edge has guides covering Pyramid, walk/wade or float the Truckee, trips to Kirman and all the way to the Owens River and Crowley? Book a day or ½ day!! call the shop to learn these waters with a professional 775-781-7112