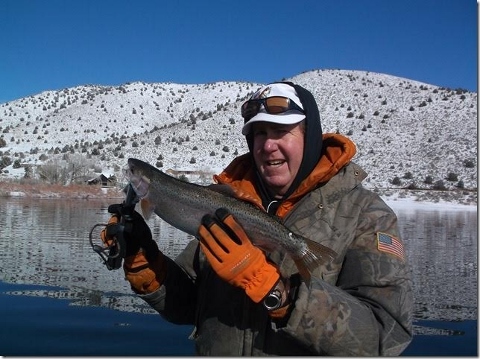 Tom Blotter from Minden NV with one of his many 2.5 pound rainbows caught.

Hello fellow anglers, The weather may be questionable, but many anglers are getting out and doing well. You just need to dress a little warmer for the occasion.

Last week I fished with Tom Blotter from Minden NV. We set out to fish Topaz Lake about 7a.m. on Saturday, January 21st.  As we turned off of highway 395 onto Topaz Park road. The road was a little icy and we had to use a little extra caution in our driving. Before we knew it, we realized the truck was no longer turning left and we came within 6 inches of going off of the edge right into a 20 foot drop. Luckily, with skillful maneuvering, Tom was able to straighten out the vehicle and continue down the road. Even at low speed and four wheel drive, icy roads can be dangerous. (I am hoping NDOT will read this report and consider a guard rail at that intersection.)

We launched the boat at the county ramp, and I must compliment Douglas County Parks Department on a great job of keeping the ramp area clear for fellow anglers to use safely.

The lake had a thick pea-soup-like fog hovering over it until about 1 pm. We did not have a GPS, so we trolled by site and remembrance of the lakes contour. Visibility was about 100 feet. By 4 p.m., we had caught and released a total of 21 nice rainbows, a few in the 2-3 pound class. We trolled J5 and J7 Rapalas in a hot steel and fire tiger pattern.  Tom and I caught as many on the top line as we did on the deep lines. Topaz lake has been doing well for anglers with a little patience. On Tuesday, we ventured back up and the day started off slow with many small 10 to 12 inch rainbows. I did catch one small brown which was quickly released. Not until 2 p.m. did we get into a great bite on our top lines, again with Raplas. As quick as it came up, the bite was over. One thing we noticed was that there was a small hatch coming off the lake, they were a small black gnat-like fly. Just a reminder that wherever you venture to, dress warm and be prepared for any and everything, including the road conditions.

Now, for the local fishing reports:
Caples Lake: The lake has plenty of ice on it. The only problem is getting to it, as the lake has 4 to 6 feet of snow on top of that ice. I have not received any fishing reports these last few weeks due to many storms that have rolled in.

Red Lake: I received a report from Josh Otto a couple weeks ago. The lake had 4 feet of snow on top of 5 feet of ice. This was before our latest weather events. Josh was jigging a 3/4 silver Kastmaster and caught a 15 inch cutthroat trout. He told me the fishing was slower than the last couple of years.

Indian Creek Reservoir: The gate on the paved road has been closed for a few weeks. When the weather changes and clears up a little, it may open up. I talked with anglers that reported a couple inches of ice on the lake last week. The dirt road from Diamond Valley Road was open, but was a little nasty to get in. I would recommend staying away from the lake for a couple more weeks, just for safety reasons. The lake was planted back in November by Alpine County, so there will be plenty of fish. The fish will be very hungry by the time the road is safe to venture out onto.

Topaz Lake Derby:  Last week's first place went to Gary Dykes from Topaz Lake. Gary weighed in a 4.5 pound rainbow at 21.5 inches long. Second place went to John Watts from Sacramento, CA with a 4.3 pound rainbow. There were 108 fish weighed in over the 2 pound mark, and only one tagged fish has come in this year. There are plenty more tagged fish to be caught, and remember, they are worth $100 cash money if you bring them to the Topaz General store to be verified! For more information on the derby, call the Topaz Lodge at 775-266-3888.

Topaz Lake Fishing Report: Trolling has been productive for those with a little patience. Needle fish or Rapalas have been most productive. The lake level has come up to almost full capacity. The water clarity is rated at 'stained', with about five feet of visibility. There is still some debris on the lake, so be care while boating. The shore anglers have also been productive using Gulp power dough or various colors of Powerbait. Inflated night crawlers also have been working well. If you have not fished the lake since the many storms, keep an eye on your depth finder. You have to adapt to the many shelves the lake now has to offer. With this high water, the bass fishing will be great in the  early spring months. The Douglas County ramp is open, where you can also rent a boat. The Topaz Landing Marina is open. They can be reached at 775-266-3550.

Mason Valley Wildlife Management Area: The NDOW has been planting trout in Hinkson Slough and North Pond. The  Area will be open on the second Saturday in February. There are some special regulations for the area. I would recommend to go on the Nevada Department of Wildlife web site to learn the size, bag limits and gear restrictions. Also, included in this area is the Fort Church Hill cooling Ponds.

Good luck on your next fishing adventure. If you have a photo of your catch, send it to [email protected]. If you have a report or a question in our local fishing area, call the Naw line at 775-267-9722.  Hope to see you on the waters. 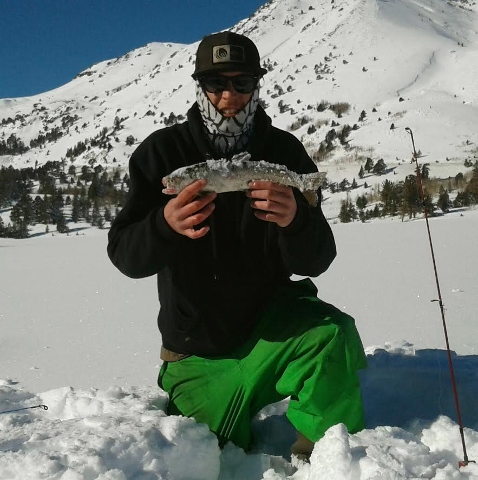 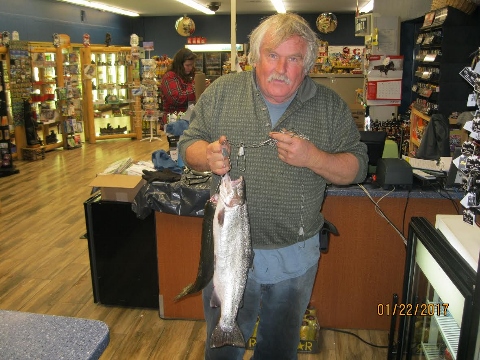 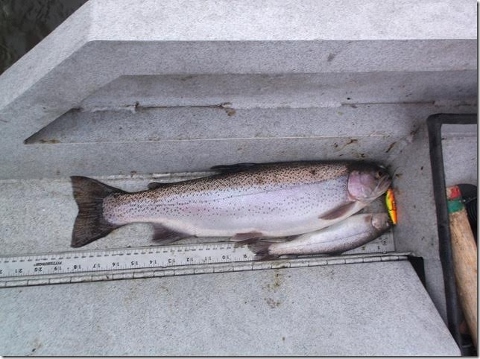 Tom Blotter from Minden NV made a double hookup on one Rapala, at Topaz Lake. 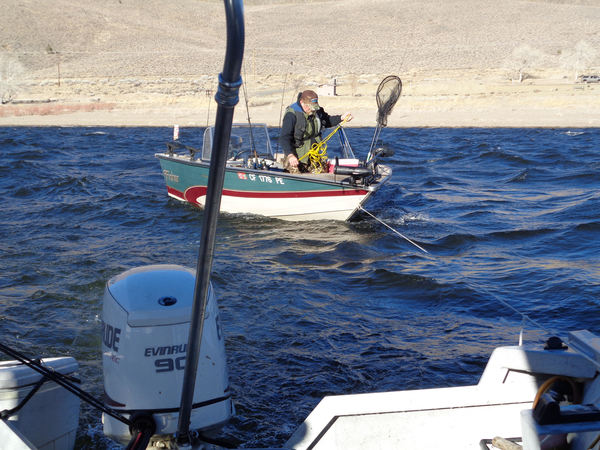