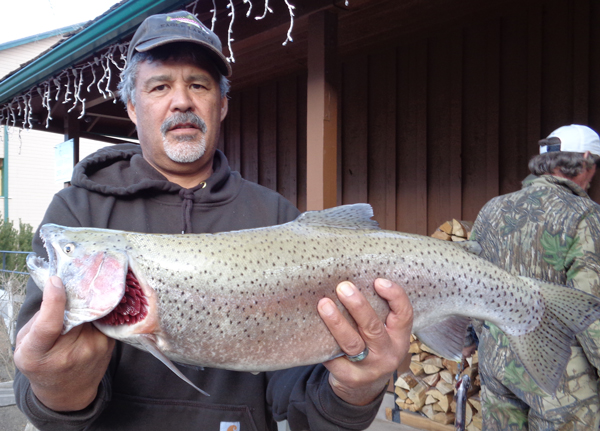 Welcome to the new year, and may it bring you tighter lines. I can truly say that the topaz Lake fishing derby is off to a very good start. On opening day they were plenty of anglers enjoying a fair weather day, where it be from shore or from boat. Most anglers were very successful. I had the pleasure of fishing with Mike and Tom Blotter. We were on the lake at 6 am and had lines in the water right at the precise moment of opening day. We covered the lake in a variety of depths. By 3:30 pm we had caught and released 40 trout and kept 4 in the 2.5 to 3 pound class. As we weighed in I ran into friend Ken Oberson, I showed him our catch and told me he had only caught a couple. But I have to say, one of his trout was an equal to a few of ours. Ken was fishing with power bait and caught a nice 7.2 lb rainbow trout from shore.  I checked in at the general store and found there were a few other large trout that were weighed in that day. The largest was from fellow angler Dustin Parker from Gardnerville Nv. As of this week, Dustin holds the first place in the derby for the largest trout at 9.4 lbs.  I ventured back out a few days later with friend Jerry Dow from Reno. We trolled the lake with an assortment of lures and caught and released 20 trout. a few of the fish were probably in the 2 pound class, but I try to play by a rule of 18 inches or larger. We plan on a few more days out this weekend and hope for a larger catch.

Lake Tahoe:  This time of years is the best time for larger mackinaw's. Fishing from the Camp Richardson area to Emerald Bay with number 11 to a magnum Rapala in  20 to 60 feet of water around the rocky areas. The Cave Rock to Logan Shoals has also been a productive area. If you want quantity of mac's I would fish the Tahoe shelf area off of Tahoe City to Carnelian Bay. Best results have been with a dodger or a flasher with a 12 to 16 inch leader and a live minnow. Start in the 150 foot depth range and move out to the 220 feet as the sun rises.

Caples Lake:  A few anglers have been up ice fishing on the lake this last week or so. Josh Otto reported in and said he fished for three hours with out a bite. I have not received any reports on the thickness of the ice. But as of last week there were a few spot of thin ice reported from travelers going by the lake. Always use caution. The Caples Lake Resort is closed for the season and will reopen in May.

Red Lake: Last report was 8 inches of ice and the fishing was good. Most anglers were using night crawlers for small rainbows and browns. Josh Otto reported that after he left Caples Lake last week he fished on Red for while and caught 5 brown trout. Josh caught three on a jig and two were caught on tan powerbait. many people would think to go out farther for deeper water. Most of the fish caught on Red Lake are caught within 10 to 40 feet from the shore.

Indian Creek Reservoir: Fishing has been fair for shore anglers using green Gulp. Inflated night crawlers are also productive. The lake level is still up and the water is pretty much weed free. The lake holds rainbow, cutthroat and brown trout. The campground and boat ramp are closed. For those that want to launch a small boat, you can use the unimproved ramp on the opposite side by the dam. Both the paved and dirt road off Diamond Valley are open.

Topaz Lake: The lake level is up and just a couple feet from being full. There is some debris on the lake, boaters use caution. Due to the high water, the shore access is limited around the lake. The larger fish caught last week were mainly from shore with Powerbait. Trollers have been using Rapala's or spoons. Many have been using a small flasher and a 1/2 of a crawler 18 inches behind the blades. both methods have been very productive. The Douglas county ramp is open as well as Topaz Landing Marina. For more information call Topaz Landing at 775-266-3550. They offer boat rentals and RV camping.

Topaz Lodge Derby:  For the first week of the derby, 100 trout were weighed in over 2 lbs. There were five tagged fish brought in. Remember that each tagged trout brought in no matter what the weight is, is worth $100 cash. Week one results, 1st place is Dustin Parker from Gardnerville with a tagged 9.4 pound 24 1/2 inch trout. Tied for 2nd place is Mark Johnson and Ed Stockton with a 7.3 lb 25 inch rainbow trout.  I also received a picture of Zaira Gonzoliz from Bridgeport CA with a tagged 4.8 lb rainbow trout. For nay information you can contact the Topaz Lodge General Store at 775-266-3337.

Good luck on your next fishing adventure, I hope to see you on the waters. If you have a photo of your catch send it to [email protected]. If you have a report or a question in our local fishing area, call the Naw line at 775-267-9722. Good fishin' and tight lines 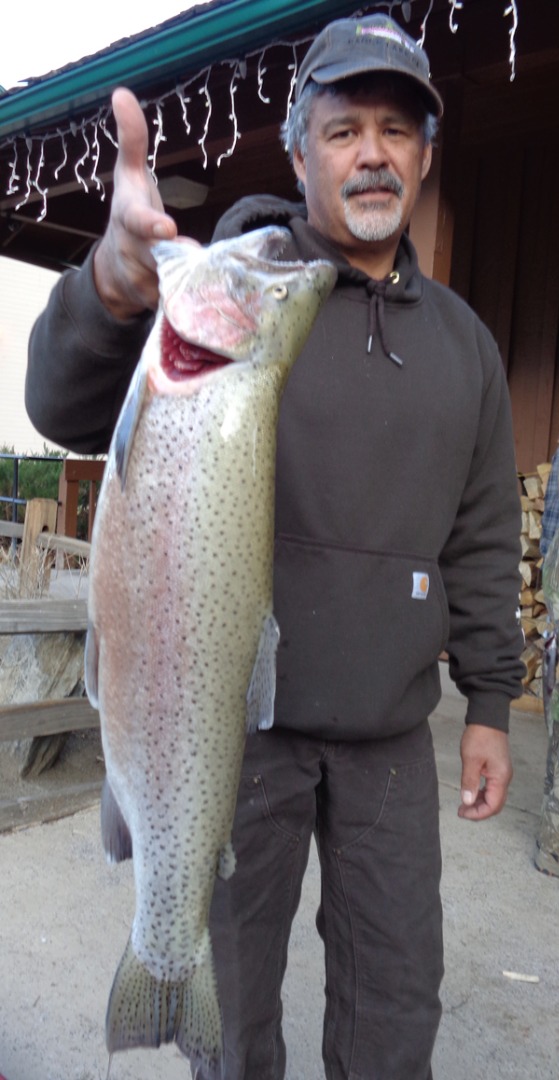 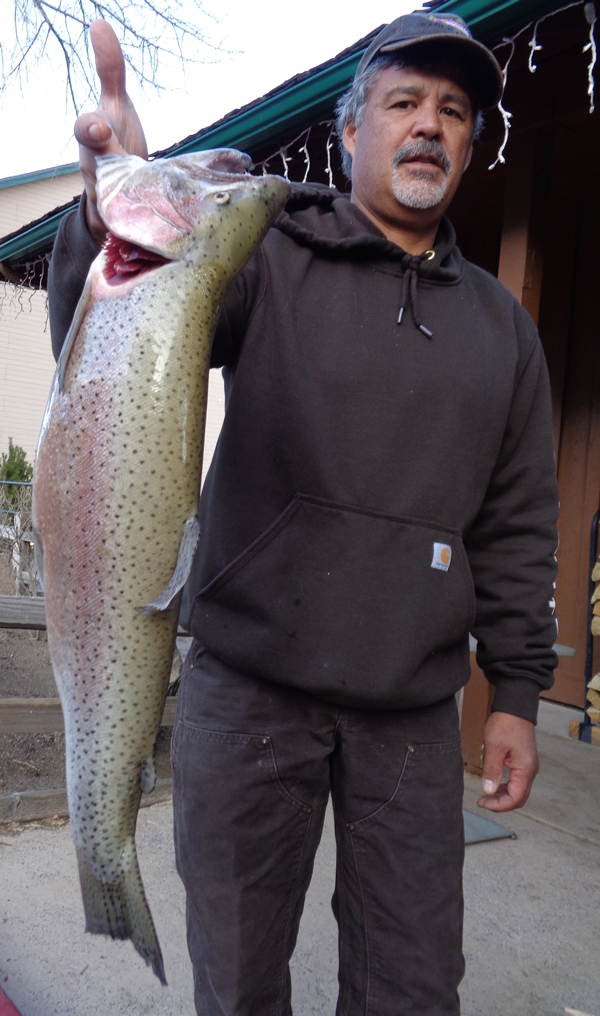 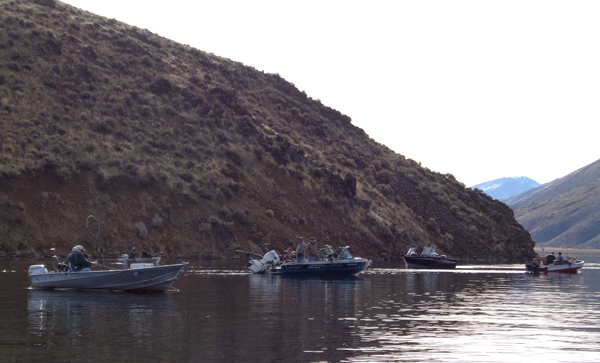 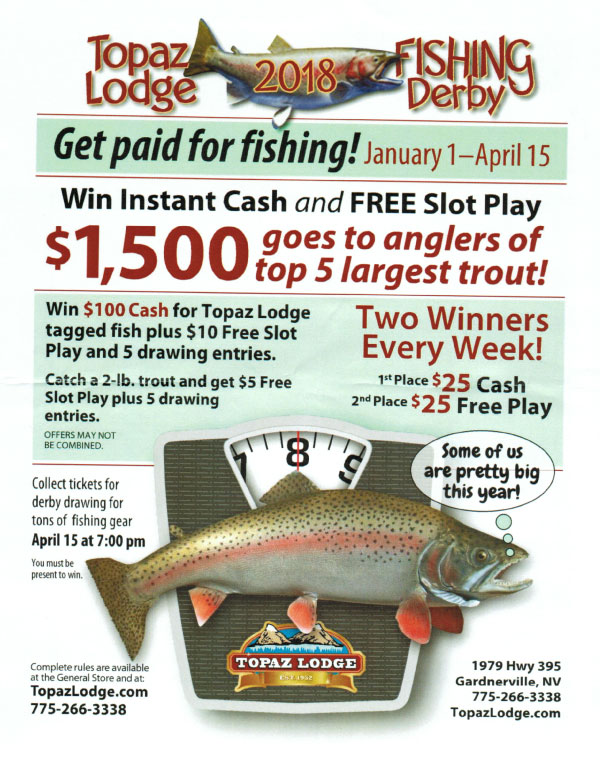