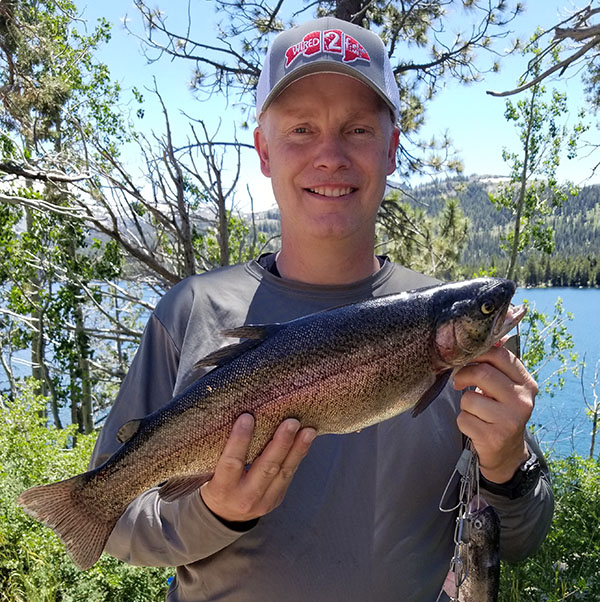 The weather is great and the fishing is on fire. Speaking of fire, there are some very stringent restrictions to adhere to when venturing out this summer. Campfires only allowed in designated campgrounds, when in a non designated camping areas. You will need to have in possession a valid campfire permit to use a lantern, gas camp stove. No charcoal bbq's are permitted out of a designated area. If you smoke, you are required to have a 10 foot area clear to the dirt around you. While in a designated camp area, do not extinguish your fire with dirt. It must be extinguished with water. Try to remember to drown-stir drown- stir and drown again method. A campfire must be fully extinguished before going to bed. If an enforcement officer drives by and sees that a campfire has reignited, you can be given a citation. We have to be vigilant about  the use of fire while enjoying the beautiful country we live in. Before its to late.

LAKE TAHOE: Summer time heat has settled in and afternoon winds are a given. All fish are stuffed with food, such as shrimp, crawdads, and kokanee salmon. Mackinaw are on the bottom engorged with food from midnight hunting in the full moon. We have been getting them in 110 to 180 feet one day and then the next 280 to 350 feet. Dodgers and minnows, flashers and minnows, flat fish, stick baits, and some bottom bouncing are all essential to getting Lake Trout 1 to 15 lbs. One day it's easy fishing and the next day not so easy. Cal Neva Point,Sugar Pine Point, South Shore Shelf are good fishing locations.For more information call Blue Ribbon Fishing Charters at  530-542-6552.

CAPLES LAKE: The lake is still high and the fishing has been great. Many rainbows have been caught by shore as well as boat anglers. Many limits of rainbows have been brought into the resort. Jack reported stringers from 12 to 20 pounds have been showing up at the docks. The CDFW has planted the lake twice in the last few weeks. The hold overs from last year have been coming in from 2-5 pounds. For more information stop by the Caples Lake Resort

RED LAKE; Fishing still reported as slow. Few rainbows in the 10 to 13 inch have been caught using salmon eggs off the dam area

BLUE LAKES;  The road is open and the fishng has picked up for pan sized rainbows. The CDFW has planted both the upper and the lower lakes this week. Powerbait or inflated crawler have been most productive.

INDIAN CREEK RESERVOIR; The lake will be crowded this weekend. But the lake has plenty of fish after the Alpine County fish plant a few weeks ago. Shore anglers have be using green or rainbow Powerbait with good success. The weeds have started to rise, but remember that weeds can be your friend. That is where the fish will hang out on a hot summer day on the lake. Thomas Bouyant spoons have been producing some nice fish in the evenings.

EAST FORK CARSON RIVER CALIFORNIA SIDE; Fishing has been very good for 1 to 5 pound rainbows. Salmon peach or rainbow Powerbait has been most productive. Small silver spinners have also been working well. The river was planted with 900 lbs of rainbow trout by funds provided by The South Tahoe PUD. For more information stop by the Carson River Resort.

WEST FORK CARSON RIVER CALIFORNIA SIDE; The river has  dropped a little and the Woodfords canyon area has been fishing well. Salmon eggs or Powerbait has been most productive. Small night crawlers with a pinch weight also has produced some nice fish in the 2-7 pound class. The river was planted this week with 900 lbs of rainbow trout by funds provided by the South Tahoe PUD. For more information stop by the Creekside Lodge.

CARSON RIVER DOUGLAS COUNTY NV; Over the last few weeks the NDOW has been planting rainbow and brown trout. The fishing has been good up by the old broken dam area. The fish are scattered and you may need to do a little walking. But where else would you rather be on a hot summer day. For more information stop by the Anglers Edge.

JUNE LAKES AREA; Smoke from the Lion Fire southwest of Mammoth Lakes has not been nearly as bad here as in the Mammoth Lakes basin. Typically what smoke is lingering over The Loop is somewhat cleared out with afternoon breezes.

TROUT PLANTS: CDFW Rainbow trout plants are every week now through August in all Loop waters. So there's plenty of catchable size trout available. The Mono Co. and private stocking of larger Rainbows from Oregon is a bit hit and miss this season. See individual lake reports following for an update or go to our Eastern Sierra Fish Plants page that is updated weekly.

FLIES: The surface dry fly bite is picking up with the warmer weather mainly in the mornings and eves when the wind is calm. Toss some elk hair caddis, mosquitos, ants, gnats, BWOs, parachute adams, etc. I like letting the fly ride the surface a few seconds then start stripping in usually getting more fish then, even if the fly has gone subsurface. During mid day switch to dragging streamers and buggers with a nymph dropper if you like 20 to 25' with sinking line. In Rush Creek roll with dries, buggers, nymphs, san juan worms, and egg patterns especially in the undercuts. This is Hopper season so chuck some of those upstream and let drift near the banks and over deeper pools.

SILVER LAKE: Silver Lake Resort (760) 648-7525: Silver has been the best lake in The Loop since last season to hook into a nice Oregon Rainbow in the 2 to 4lb range and should continue to be so with another load due next week. Stop in at the resort to see what's working best.

RUSH CREEK: The section of Rush between Silver and Grant Lakes is the best bet with some catchable CDFW Rainbows, an occasional Oregon Rainbow, and some resident Browns. Creek flows have subsided recently resulting in more easily accessible fishing. Along with the typical baits and lures try tossing salmon eggs or night crawlers into the undercuts. Remember, fish like a place to hide usually in the shade.

GRANT LAKE: Grant Lake Marina - no phone. The lake level has stabilized after the Spring run-off with most of the shore accessible. Trolling Taz Devils and Rapalas have been working but you gotta get out there early, early. Try working the upper section near the Rush Creek inlet in a tube or kayak with lures and flies.

JUNE LAKE: June Lake Marina 760)648-7726 June is due to receive a load of Oregon Rainbows this week. Trollers are doing well 3 to 4 colors for Rainbows and deeper to 9 colors for Cutthroats. Bait and lure fishing is strong from boat and shore. "Snapper", one of our guys at Ernie's, has done well using jigs from shore mostly at the south end. Hillary at the marina points out that they have full and half day boat rentals, pontoon boats that are handicap friendly, and pay showers.  Big Rock Resort (760 )648-7717 Mike at the Resort tells me that there's more Cutthroats being caught this year than past years which is a good sign for the population.

GULL LAKE: Gull Lake Marina 770-648-7539  According to Sergio fishing has been great mostly for the CDFW stockers although a couple nice 6 pounders were brought in the past week. Gull is the smallest lake in The Loop and one of my favorites cuz it's pretty easy to locate the fish and as mentioned Location, Location, Location is one of the keys - in fishing and real estate. Report provide by Ernies Tackle at 760-648-7756.

Caples Lake: Boaters have been Using Flashers and Worm.
Woods Lake: Woods Lake Report
Red Lake: The fishing has been Very Slow.
Blue Lake Lower: The Road is Open to Upper and Lower Blue lakes!
Indian Creek Reservoir: The Lake Level is Still Up!
East Carson River (CA): The River is Running Good but Very Fishable!
Grant Lake: Lake has been Rising all Spring Due to Run-off!
Rush Creek: Flows Should Taper Off Soon!
Gull Lake: Fishing Should Pick Up With the Weather Change!
June Lake: Powerbait as Always is Working!