Angel Lake, along with all the high mountain lakes in the Rubies and East Humboldt’s are now ice covered and fishing is done for the year. Don’t expect the lakes to open up before Memorial Day.
Photo Credit: Courtesy of NDOW

If you have fished Wildhorse over the past week or two you may have noticed some floating dead perch.  With cooler water temperatures you may wonder what is going on?  Well early in November the lake “turned.”  The process of turning is probably responsible for the very small perch die off when the less oxygenated water near the bottom moved up in the water column where the perch were, basically suffocating them.

Temperature changes very slowly in a large body of water as its mass acts as a storage unit for heat.  During the summer, the top layer of water heats up, while the depths hold the cooler denser water.  The two layers are separated by another layer called a thermocline.  This is an area of rapid oxygen and temperature change in a relatively thin layer.

As the surface layer cools down with the longer nights and colder weather it becomes denser. When it gets close to the temperature of the depths, generally between 40 and 50 degrees, it starts to sink into and through the thermocline.

Eventually the temperature of all the layers becomes similar and the different layers mix together.  This is when the lake turns.  The surface is stirred by winds mixing oxygen into the water, it becomes cooler, and therefore denser because it is exposed to the cold air temperatures and sinks deeper, drawing the less oxygenated warmer water to the surface.  This cycle continues for a while drawing oxygen down into the depths.

Like most compounds, water gets denser as it gets colder, until around 39 degrees.  That is where it is at its densest.  Below that temperature it gets lighter, until it becomes a solid at 32 degrees where it is so light, that it floats on the denser colder water.  This ice on the surface helps insulate the water below from even colder air temperatures.

With the oxygen being replenished in the deeper water, fish can descend into that area, which during the cold of winter is actually warmer than near the surface.  This is how many fish can survive Nevada’s harsh winters.  It also keeps the depths of the lake from becoming sterile areas as the decay of dead plants and animals that settle to bottom would use up most of the oxygen without this mixing.

Both Wild Horse and South Fork are dimictic (the word of the day), which means that they mix twice a year, once in the spring and then again in the fall.

Though the road is still open, the lake is ice covered and there will be no more fishing reports until late spring or early summer depending upon snowfall this winter.

For safety reasons and to expedite the rebuilding of the dam, the lake is being drained and anglers should avoid this lake. Water being drained will be diverted to Comins Lake and if conditions allow, NDOW will be performing a fish salvage moving the fish from Cave and taking them to Comins Lake. Shorelines will be very soft and dangerous due to the complete saturation of the soil as the lake is drained. By draining the lake it should shave a couple of years off the re-building of the dam and cut costs tremendously. It will also make the project much safer for those performing the work..

No recent report but trout fishing should be fair to good here as at other reservoirs.  The same flies, lures and techniques that work at South Fork should work here.

Surface water temperatures are in the low to mid 40’s depending upon time of day and cloud cover.  Fishing has been slow for bass but good for 14 to 17-inch trout.   Anglers will catch trout on nightcrawlers, spinners, nymphs and wooly buggers. Chironomid patterns under an indicator are effective here this time of year.  Bass fishing is slow.  Minnow imitations and large streamer patterns should work for northern pike.  Anglers, please note that NDOW has placed radio tags in several Northern Pike.  These pike will have an orange floy tag near their dorsal fin and a small antenna coming from their stomach. Please return these fish to the water for research purposes.  If the pike doesn’t have the transmitter tag, please humanely dispatch the fish.  Do not put it back in the lake.  Anglers may catch an occasional Bluegill but NDOW is asking that those fish not be harvested since they are the founder population of what could be a fun pan fishery.  Comins Lake was stocked last week with approximately 3,000 trout bringing the total fall stocking to around 14,000 trout.  Stocking is done for the year.

Surface water temperatures are in the low to mid 40’s here as well and fishing has been good. Best flies right now are leech or wooly bugger patterns.  Fly rodders will also do well on bead head pheasant tails, wooly buggers, chironomids and parachute Adams.  Spinners, PowerBait, and nightcrawlers will do well for the spin casting crowd.

Almost dry and no fish

Stream flows are down slightly compared to last week as the colder air temperatures and cloud cover have slowed snow melt.  With colder water temperatures due to some afternoon snow melt and cooler air temperatures, expect stream fishing to be slow to fair.  As of November 19, the East Fork of the Owyhee was flowing at 15 cfs near Mountain City, the Bruneau River at 14.6 cfs, the Jarbidge at 10.7 cfs, Salmon Falls Creek at 51.6 cfs, Lamoille Creek at 8 cfs, the South Fork of the Humboldt at 8 cfs, Cleve Creek at 4.3 cfs, Steptoe Creek at 2.2 cfs and Kingston Creek at 3.7 cfs.

Alpine lakes are frozen over and there will be no more fishing reports until late spring or early summer depending upon snowfall.

Trout fishing has been good most days in the collection ditch. Bass fishing is done in the south lake. While dry flies may still catch an occasional fish in the ditch, nymphs and streamers are the best bet. Leech patterns, balanced leeches, crystal buggers, #14-16 hare’s ears, and #16-18 PT nymphs and chironomids under an indicator are probably the best bet. Other flies working include the usual small nymphs, olive soft hackles, red or blue copper Johns, and prince nymphs. A few fish have been taken on egg patterns. Some of the best fishing reported has been on the days that were cloudy and windy. On warmer afternoons if there appears to be a hatch, Griffith’s gnats and #14 t #18 blue winged olives (both dries and emergers) may be tried. Spin anglers should be using small spinners in black or olive with contrasting yellow or red colors. On brighter days, gold or silver lures seem to work better.

The surface water temperatures mid-week were 43 degrees in the morning and 48 late in the afternoon.  Bass fishing has been slow, while trout fishing has been fair to good depending upon the day.  Low light conditions (early morning and late afternoon) seem to be working the best.  Those fly fishermen that were catching fish report that they have been catching nice fish with a variety fly patterns including wooly buggers, leech patterns, red copper Johns, hares ears and chironomid (midge larva) patterns. Ice cream cones, red butt buzzers, red and silver zebra midges, red brassies and frostbite chironomids should all be working.   Anglers are also having some success with spinners, worms and PowerBait fished from shore.  One angler reports good luck on largemouth at the north end of the lake in 30-35 feet of water using deep diving crankbaits and blade baits.  When fishing for bass this time of year, get deeper and fish more slowly. Expect the boat dock to be removed from the lake after this weekend.  South Fork was stocked with more than 5,500 trout last week bringing this fall’s total to a little more than 39,000 trout.

Surface water temperatures are in the low to mid 40’s and the trout fishing has been air to good while bass fishing has been slow. Shore anglers are now doing as well as boaters for trout. While both Hendricks and Penrod arms are still popular with anglers producing fish. Chironomids, leech patterns and wooly buggers are still the best bet for fly anglers but the usual nymph assortment of copper Johns, hares ears, and pheasant tails have all been working. Bait anglers are catching fish with worms or rainbow or sherbet PowerBair. Small spinners have also been effective. Boaters continue to have success with flashers tipped with worms. Bass anglers have had a little success with perch colored deep diving crankbaits and blade baits. Expect to catch several perch between trout hookups. The lake level is still holding at 50% capacity and both prop rock in the canyon and the island off the state park are just barely above water. Both are still boating hazards.  Expect the boat ramp to be removed from the water any day. Wildhorse was stocked with another 6,000 trout last week bringing the total fall stocking to approximately 50,000 trout. Stocking is done here for the year.

Very little change here. With surface water temperatures dropping into the high 40’s, fishing for trout has been fair to good while bass fishing is just fair. Time to switch to blade baits and crankbaits for bass. For the bait anglers, worms seem to be working better than PowerBait for trout. Spin fishermen should be using blue or green spinners with silver blades. Fly rodders should have some success with leech and wooly bugger patterns. Nymphs include blue copper Johns, hares ears, PT’s and chironomids. The boat ramp is out of the water and is unusable. Cartopper craft only advised.

Snoods and Wattles - Turkeys in Nevada 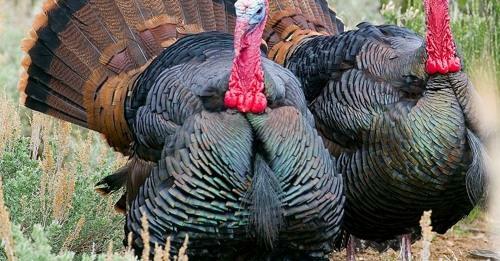 11-19-2021
In the spirit of Thanksgiving next week, this Nevada Wild covers all things turkey. Ashley Sanchez and Aaron Keller sit down...... Read More