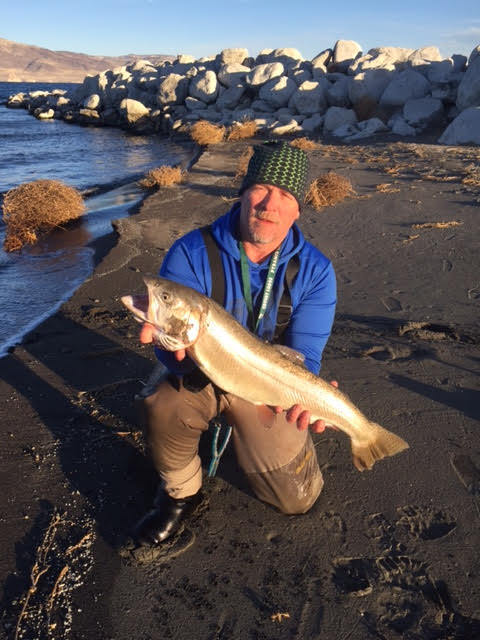 Hello fellow anglers, I hope you have a safe and Happy New Year. I will be bringing in the Naw year at Topaz lake with 500 other freezing souls. The water level is up 12 feet from this time last year, both of the boat launches will e open. The Topaz Landing Marina will be open with rental boats this year. For more information call Chuck at 775-266-3550. The weather says 20% chance of rain or snow, but one thing will be one hundred percent. It will be cold. Bundle up and get ready to catch some cash. The Topaz Lodge 2017 derby will start at 6:16 AM on Sunday morning. Each Topaz Lake tagged fish will be worth $100 cash plus $10 free slot play and 5 entries into the drawing at the end of the derby on April 16th. Any trout caught in Topaz lake weighing in at 2 lbs or more will receive $5 free slot play and 5 entries into the drawing. Each week there will be two winners for the largest trout weighed in at the general store. 1st place will be awarded $25 cash while 2nd place will receive $25 in free slot play. Also as a bonus, each week all winners will be announced here in the Naw report along with pictures if available.. Where else can you get paid to fish? The derby is open to all anglers 21 years of age and older, As it is sponsored by the Topaz Lodge and Casino. There is no entry fee, you only need to be a slot member at the lodge. You can sign up at the cashiers booth in 5 minutes or less. On April 16. 2017 at 7 pm, there will be cash and prizes worth $1,250 given away. If you have any questions on the derby or to make reservations at the Topaz Lodge call 7765-266-3338.

There are a few other places in our area that have opened up for fishing.

CAPLES LAKE; A report from Jeff Oneil from South Lake Tahoe. Jeff fished a couple days at Caples and reported the action as slow. The spillway had 14 to 16 inches of ice, while the dam had 12 to 14 inches of ice. He talked with a couple other anglers that had not much success either. Best action in the past has been night crawlers or fresh water shrimp for bait fishing. kastmasters or Thomas Buoyant spoons for those that want to jig. I have had success with Banjo minnows for the mackinaw's. I will be venturing up next week to try my luck with a few friends. We can hope the fishing will pick up.

RED LAKE ; Josh Otto reported to me last week. The lake had 12 inches of ice on the lake and the fishing was slow. Josh did catch a nice Cutthroat trout 16 inches long, he was jigging a silver Kastmaster lure. Josh said he caught a few smaller rainbows using a small jig head with tan garlic Powerbait. Kastmaster lures are the most productive lure I have used at this lake. Salmon eggs or night crawlers have also been productive in the past. Will be venturing up to Red lake as well next week.

SILVER LAKE; A couple anglers ventured up last week to find 12 to 14 inches of ice on the lake. They were using gold Kastmasters and caught a couple mackinaws up to 18 inches long.. They used night crawlers and only got a couple bites.

PYRAMID LAKE; The lake has been fishing well through the season. I spoke to a friend and fellow angler Jerry Dow from Carson City. he was fishing with friends off the shore between Warrior point and Sutcliff area. Jerry was using a number one rainbow patterned Torpedo spoon and 6 pound test line. The result was a 16 pound cutthroat trout, which took him 45 minutes to reel in. Jerry and his team caught a few more on that trip in the 19 to 24 inch class. Most anglers I have spoken to have been fishing Warrior point down to the Popcorn area. They have been fishing the drop off areas close to the shore with great results.

Good luck on your next fishing adventure. If you get a photo of your catch send it to [email protected] If you have a question or a fishing report in our area call the Naw line at 775-267-9722. The line has been out of commission for a few weeks due to a miscommunication with Spectrum Cable, but the issue has been resolved. Keep the reports coming in. I hope to see you on the waters, Good fishin' and tight lines 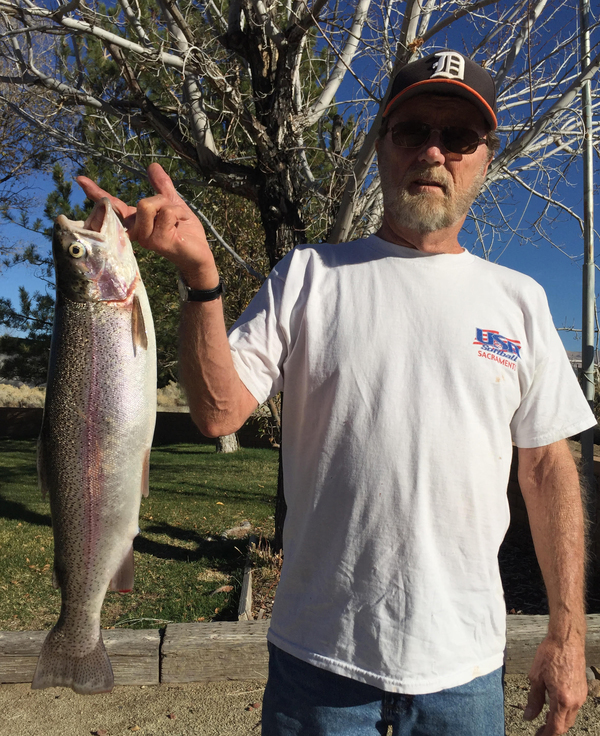