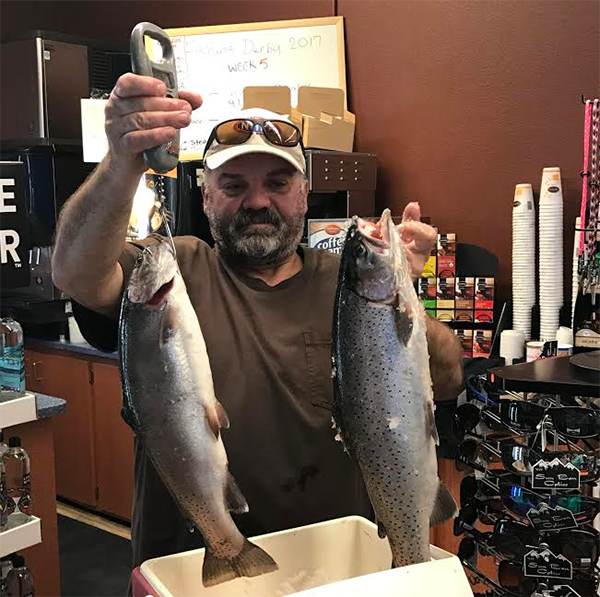 Hello fellow anglers; Be careful what you wish for. We have all been praying for rain, and we got it all at one time. Many areas in our local area are either not fishable or are not accessible. Some good news for Pyramid lake anglers. They are trying to get partial access open to the public with in a couple weeks. We will have to wait and see, and maybe a little prayers would not hurt. But there are some new waters that have opened to fishing in our area. The  Mason Valley Wildlife Management area opened to fishing on February 11th. Make sure to read your regulations when fishing this management area. Not all bodies of water are open to fishing and there are special regulations for each body of water. Open areas would include North Pond, Crappie Pond, Bass Pond and Hinkson Slough, also noted open waters would be the Fort Churchill Cooling pond located with in the management area. The Nevada Department of Wildlife has planted North Pond, Hinkson Slough and the cooling pond with rainbow trout. most areas also have Bass, catfish and blue gill. The wildlife area is located  1 mile north of Yerington of highway A95, take Miller Lane to the Mason Valley Wildlife area sign on Lux Lane. Now for your local fishing report.

LAKE TAHOE:   When you can get out, fishing has been productive. The Cave Rock launch ramp has been closed a few time for weather related issues. Gene St Denis caught a 10lb mackinaw on one of his last trips. Best areas have been the Cal/Neva shelf following the drop line all the way to Dollar point. The area from Camp Richardson to Tahoe City has been productive. For more info call Blue Ribbon Fishing Charters at 530-544-6552.

CAPLES LAKE:   Due to weather and road conditions. The lake has been inaccessible. Josh Otto reported he ventured up last weekend. There was flooding issues near Kirkwood and there was no areas that had been plowed for parking. The resort is closed until spring, but they are accepting  reservations for the 2017 season.

RED LAKE:    The lake has a few feet of snow over 5 feet of ice. I spoke with Josh Otto last week. Josh said he tried to fish the lake but the parking area had not been plowed and had a foot and a half of snow on it. No other report have come in for the last few weeks.

INDIAN CREEK RESERVOIR:   If I had not seen it myself I would not have believed it. The lake level has risen a little. Shore fishing this year is going to be a little crowded. On the side of the lake with the unimproved launch area, by the dam. The water level is about 60 to 80 feet from the restrooms, where before it was a one hundred feet or more to the water line. Josh Otto sent me a picture of the sign that reads  " No Motorized vehicles" that is located between where the water level has been for the last few years and the bathrooms. It is now submerge up to the bottom of that sign. The paved road is closed and gated, the dirt road from Diamond Valley is very questionable. On a cold dry day the lake is accessible, any rain at all and I would highly not recommend venturing in.

TOPAZ LAKE:    The lake has come up to almost full capacity, they still have another 8-10 feet before full capacity. Fishing has been good for shore and boat anglers. For the shore anglers, the water level has come up so much that the many areas are not accessible and the others have shrunk in size. The boaters have been using flashers and a night crawler, or pulling Rapalas or kastmasters. The shore anglers have been using Gulp or various color of Powerbait. There is a lot of debris on the lake. Last week I fished with  friend Tom Blotter,  we came across some debris we did not expect. Seems a young calf had been swept down the river and ended floating on Topaz Lake. There were many large logs and snags floating on the lake. Use caution when boating on the lake. Tom and I had our best luck on J5 or F7 Rapalas, our first hit was in 60 feet of water. Started at 7 am and fished until 4:30 we boated 24 fish up to 3.15 pounds and lost a few larger fish. For more information or if you want to rent a boat, call Topaz Landing at 775-266-3550.