With the discovery of illegally planted Northern pike in Comins Lake, the Nevada Department of Wildlife (NDOW) is offering a $10,000 reward for information leading to the prosecution of the person(s) responsible. Conviction for this crime would be a misdemeanor, but the crime also carries hefty civil penalties that can reach into the tens of thousands of dollars.

The reward money has been donated by several sportsmen’s groups, including Nevada Bighorns Unlimited and the Operation Game Thief Citizens Board.

“We’ve invested tremendous time, money and resources in eliminating pike from this fishery. The person illegally planting fish is costing sportsmen money that could be better spent, and they are destroying one of Nevada’s most productive and heavily utilized fisheries,” said Chief Game Warden Tyler Turnipseed. “This is an ugly and damaging act, and we intend to find who did it.”

In 2015, NDOW spent more than $250,000 to remove illegally stocked northern pike that had decimated the trout fishery at Comins Lake. Since then, NDOW worked to rebuild the fishery with the introduction of trout and largemouth bass, all designed to benefit the sportsmen of White Pine County and visitors from all over the country. “This malicious and illegal act seriously endangers our effort to restore this important fishery for local anglers and those who travel to White Pine County to enjoy amazing fishing,” said NDOW Fisheries Chief Jon Sjoberg.

At its peak in 2004 Comins Lake reached 35,000 angler use days, an estimate of how many people fish a body of water per year based off angler questionnaires, making it the fourth most visited fishery in the state behind only Lake Mead, Lake Mohave and the Truckee River. With the introduction of pike, that number fell to around 2,000 angler use days by 2013. The money spent by anglers using Comins also dropped from over $2 million to around $73,000 during that same time frame.

Northern Pike are not native to Nevada, and when introduced into certain waterways, this voracious predator consumes all the natural resources in a given waterway, destroying native fish first and eventually causing a collapse of the invasive pike as well. “There’s a reason why pike are considered an invasive species in Nevada,” said Sjoberg. “The people illegally introducing pike are destroying a fishery, not creating a new one.”

Anyone with information on this illegal introduction of pike can call the OGT hotline at (800) 992-3030. Follow Turnipseed on Twitter for the most up to date information @Chief_GW_NV for up to the minute information on boating, wildlife and water safety in Northern Nevada. 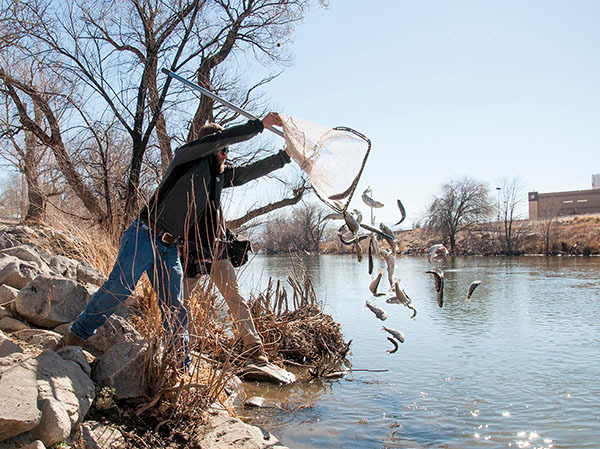 8-7-2017
Is there such a thing as Christmas in August? The Truckee River flows have finally reached a level that allows...... Read More

7-25-2017
The regions urban ponds have been stocked heavily since the spring but the stocking rates have slowed recently due to...... Read More