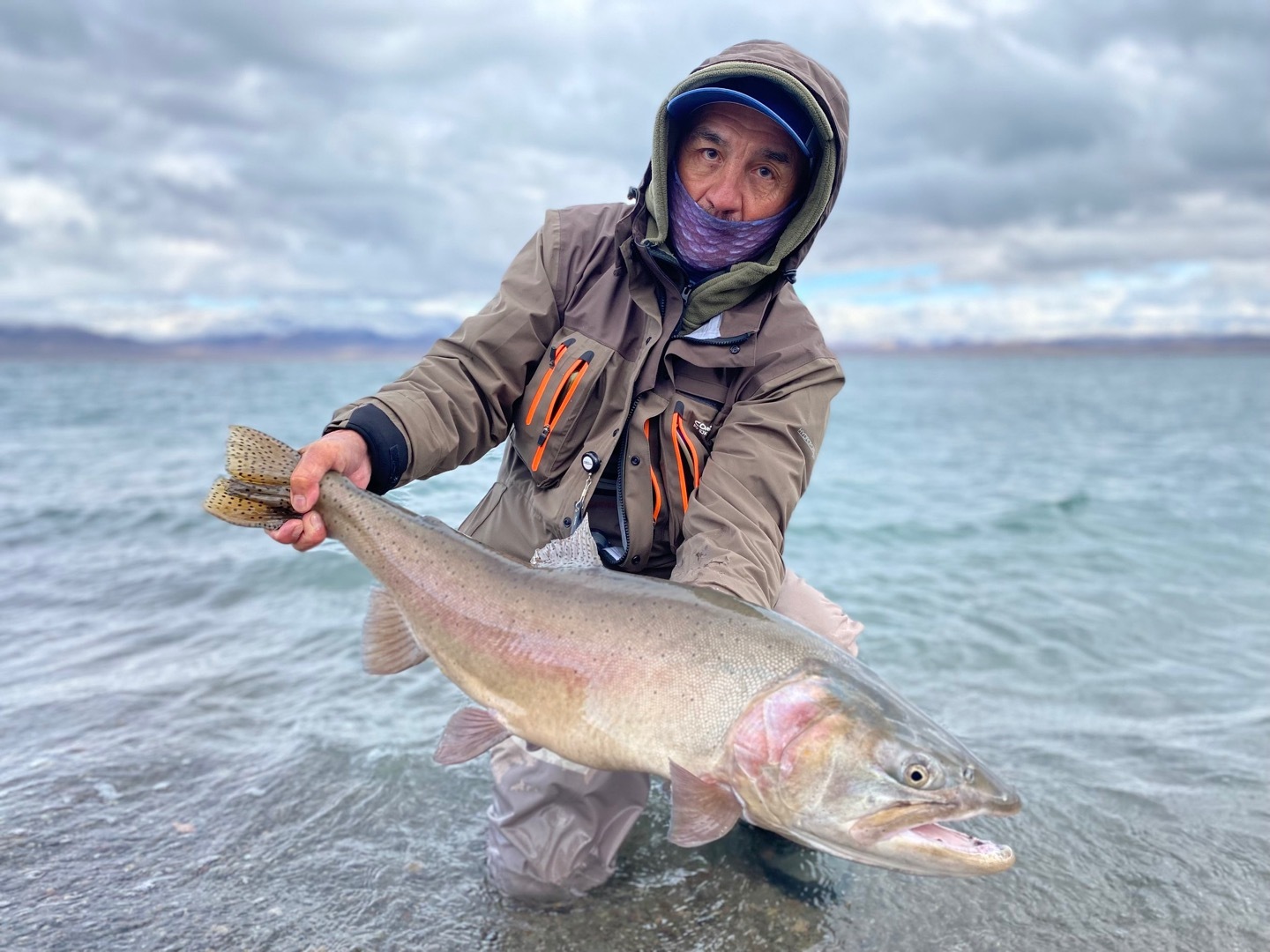 Juan drove out from CO and was definitely rewarded. The man is a machine.
Photo Credit: Courtesy of Pyramid Fly Co.

The large Pilots have been lurking the shallows a bit more the last few days with the lack of high pressure. These storm systems are dropping the shore temps as quick as can be and the bigger fish we are all after are hunting those ledges and looking for food as they continue bulking up on bait fish. This winter we are running into some real brutes and hook busters. The pure power in some of these fish is just mind boggling when you think trout. I believe some of these large Pilots with giant adipose fins are a result of the big water years we have had recently and their power is more than noticed. Not to mention the abundance of food these fish have to constantly guzzle down.

Whether it be mass amounts of tui chubs, piles of chironomids found throughout the lake and numerous other aquatic food sources found all over this large alkaline lake, these large carnivorous cutthroats never go without a meal. Yes, they may be very picky at times but if you spend enough time on this lake, you'll run into one of those days it seems one can't do anything wrong. Full on chaos! Sore arms at the end of the day with and ear to ear grin like a little kid on Christmas eve. Bobbers dropping as your eyes close on the couch, your arm yanks setting the hook. Your dog looks at you like your somewhat special as they know damn well, you're just sleeping on the couch. It's days like those that really dig Pyramid lake under your skin.

The past week we have seen it all from as slow as can be to pretty damn good! The last couple days have really picked it up for us trophy hunters as the cold temperatures have been dropping those shore temperatures to make temperatures more favorable for the cutthroat to roam the shallow ledges. Combine that with the low pressure and it can make for quite the day on the water. Hot fish that are still keying heavily on their largest protein source, the tui chub. These fish are nothing short of pissed and have been putting skills to the test. The next couple weeks we have low pressure systems pushing through that are going to get the large pilot peak cutthroat pushing in heavy as they pack on the weight before spawn as they get ready a tad earlier than the smaller and generally more showy and colorful summit strain. The lake contains 2 sub species of Lahontan cutthroat trout.

The summit strain has a bit more spotting, bigger spots, more color and an adipose fin. The large fish that are the OG's to the lake and grew up past 60lbs back in the early days are the Pilot peak strain. These large aggro monsters are the cutts we are seeing in the 20lb+ class already. These guys have a bit less spotting and the spots are generally a bit smaller, less color and usually have no adipose fin hence they are clipped as babies in the hatchery. The last couple years we are seeing a few of these large fish rearing a nice adipose, a bit many to be all missed fins. And oh boy do some of these Pilots with an adipose have a bit more pep than any of the ordinary big ones. They're built a bit different and shout "wild fish", all day to a lot of us. They're mad!

When we say we fish all over the lake from end to end we mean it. Plan A doesn't always work, nor is it always an option. There are fish all over the place this time of year as they are nowhere near spawn and don't have a reason to be piled up in the middle of the lake. A great time of year to go explore new ledges and shelves for a nice change of scenery and a great way to build confidence in new areas to fish. Some days the wind won't let you fish Plan A, or it's just too damn uncomfortable to make it fun. Plan B allows all of the above and proves to be a new area and confidence zone. Explore!

Bait fish patterns are still these fish's main food source as we haven't quite transitioned into winter mode and midge time. That being said there are fish being caught on midges but balanced leeches under the indicator have remained king still. As we slide into the cold of winter real soon that will change in an instant. But that does not mean these large glutinous fish won't turn up a hamburger over a French fry. Natural leech colors have been the most consistent. Darker colors on these dark days have been making the bobber disappear more often. While stripping flies has its days, hanging the flies under the bobber keeps them in the strike zone all the time. So, until these fish are piled up heavy in the shallows the bobber will remain more consistent.

With December half way over we start looking at some really busy weeks as the fishing is getting better by the week. These large Pilot peaks we are all after are the hottest and thickest these next couple months before they slide into spawn mode. Now is the time to go trophy hunting for the big drag peeling cutthroat. It's a big fish game. They are hot, smart and ready to party! If you have big fish on the brain, now is the time. After all, you can't catch em from the couch. 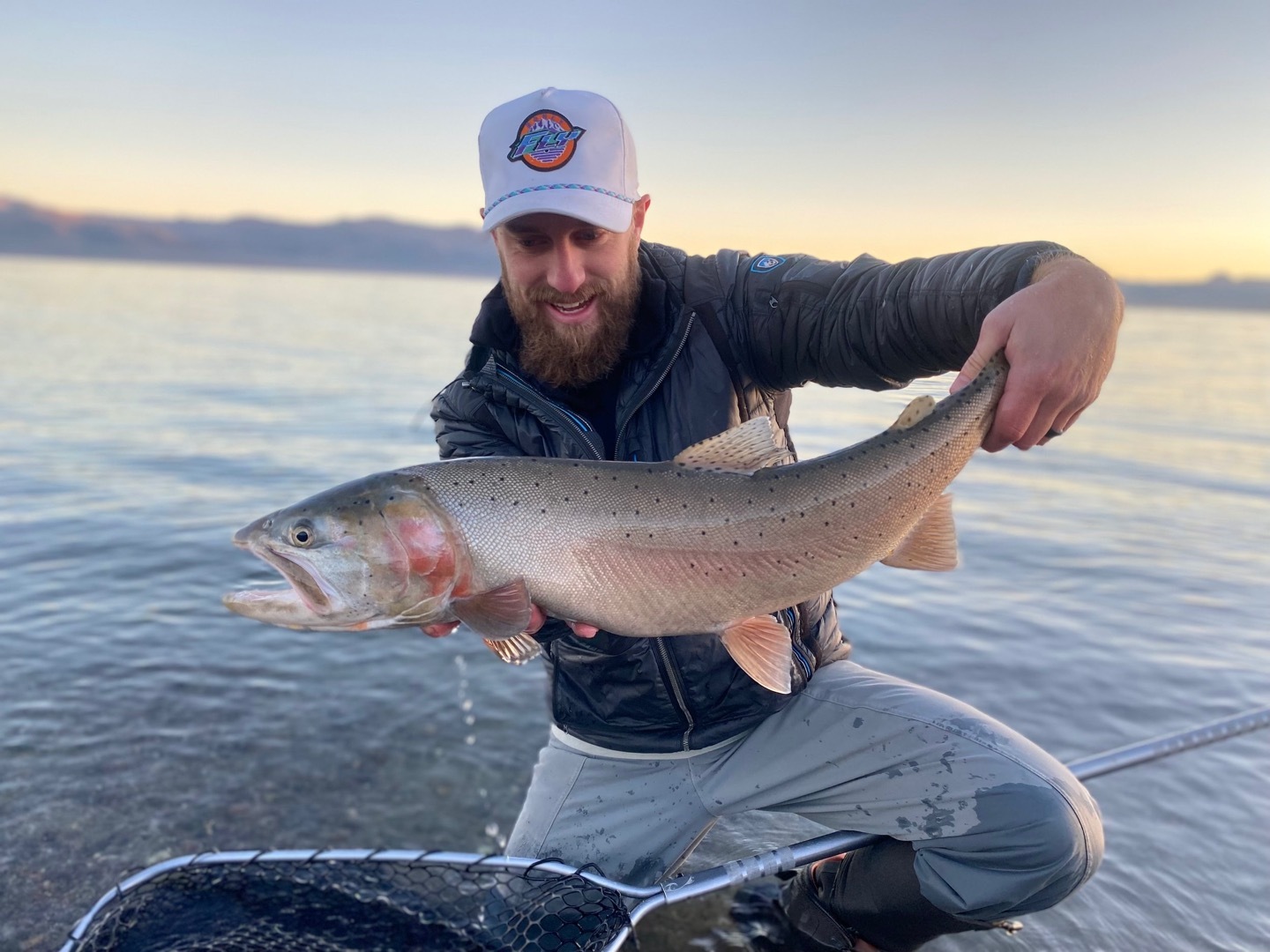 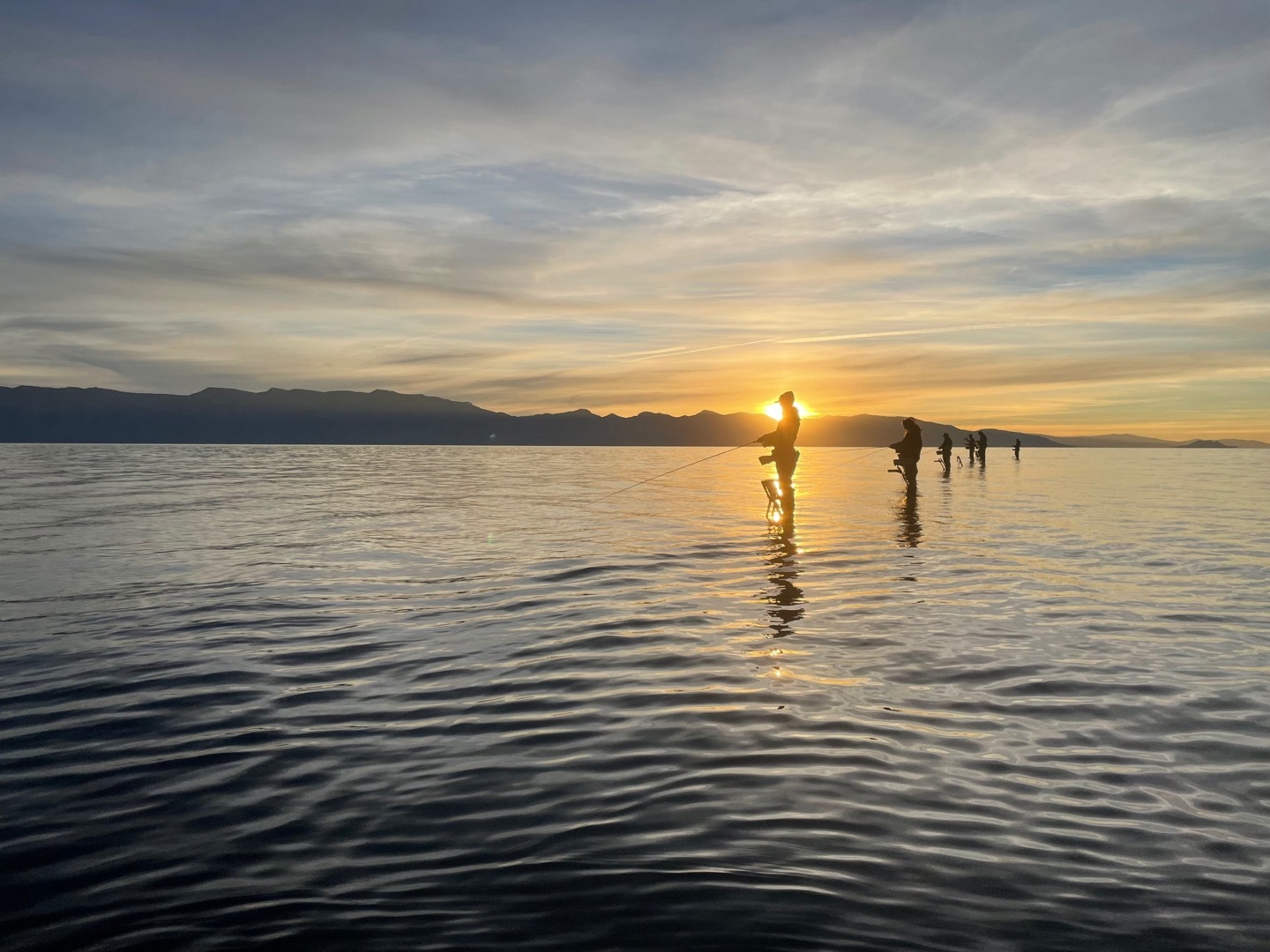 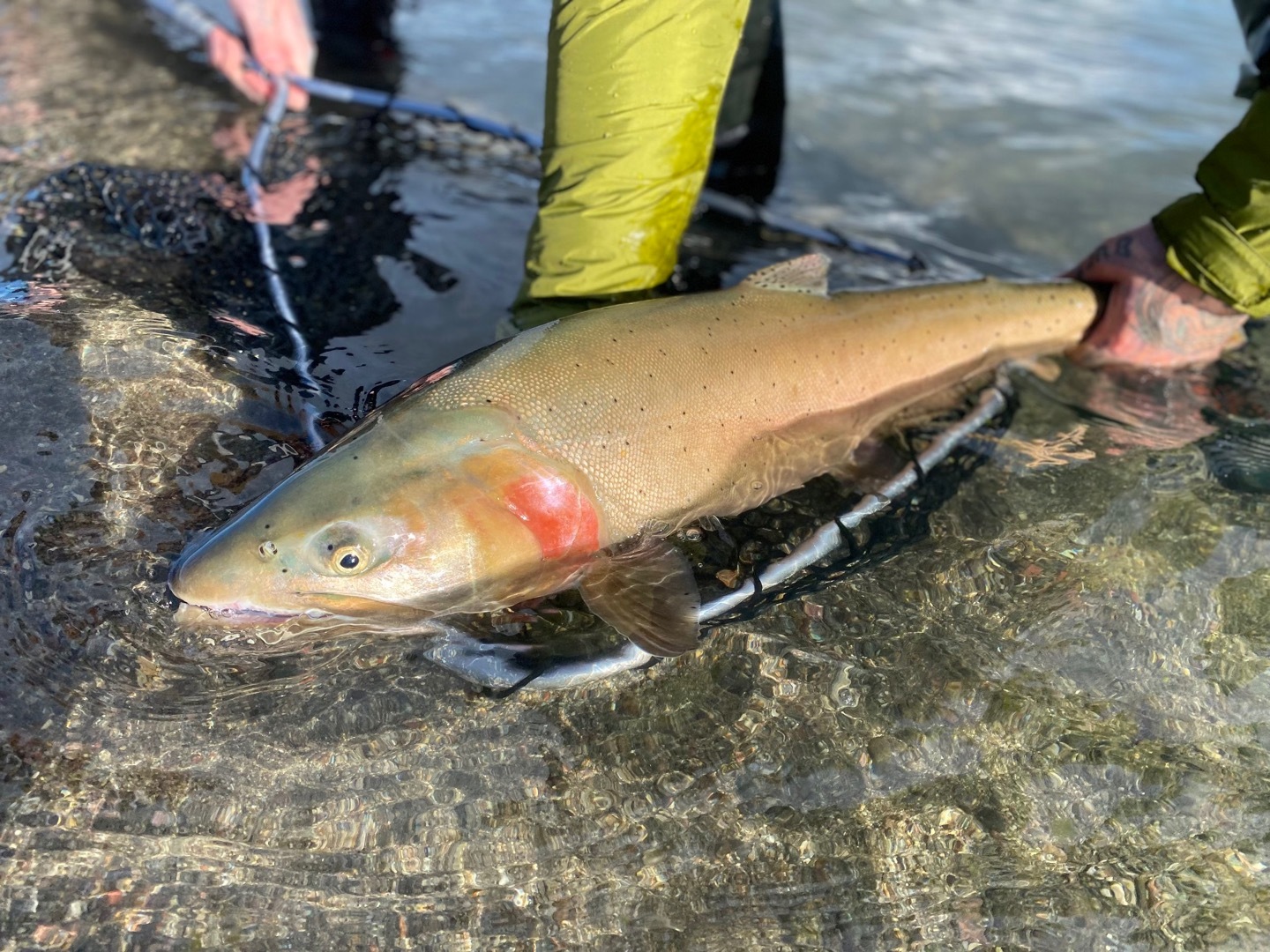 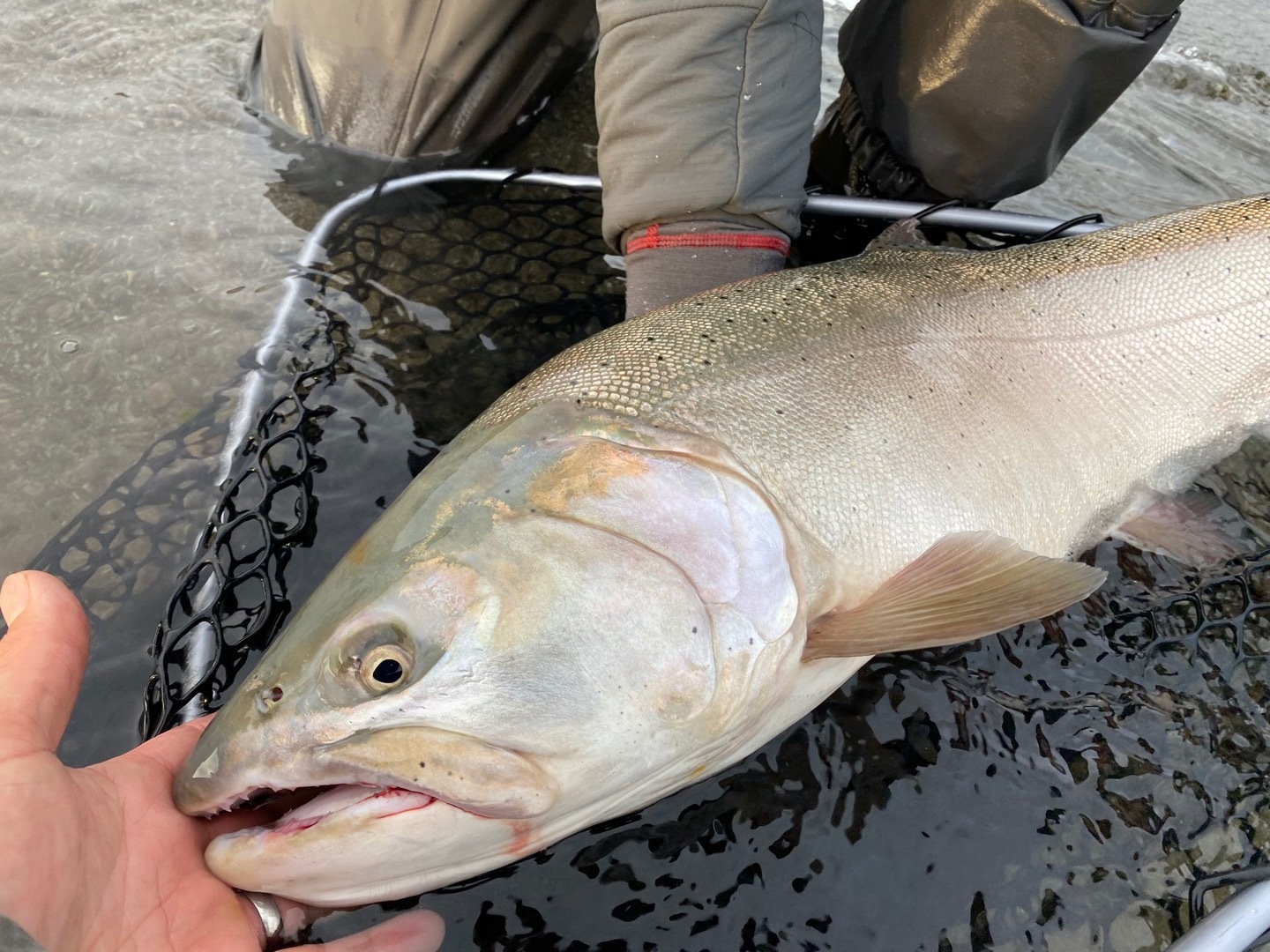 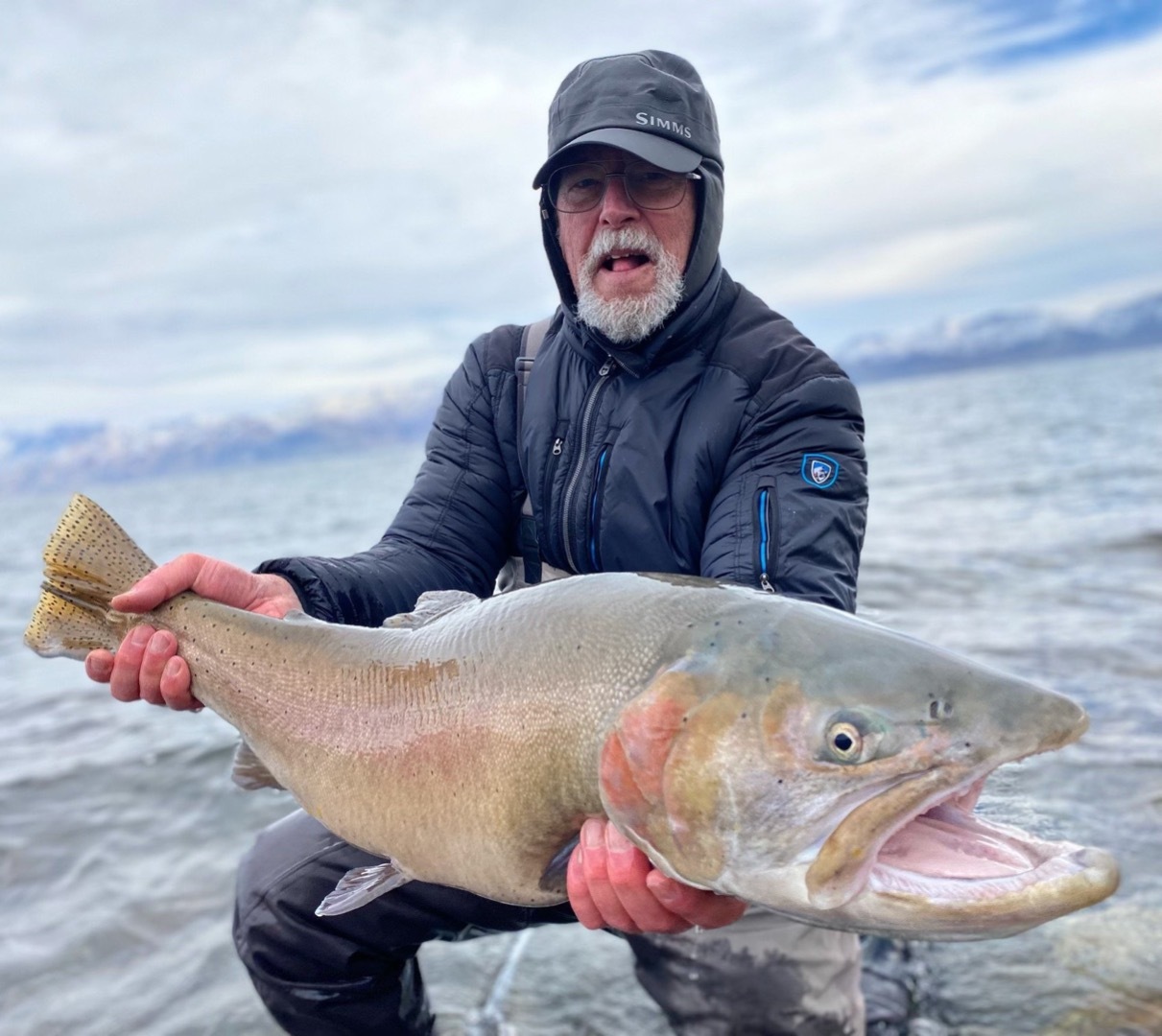 Ted stuck it out thru the storm and it really paid off.
Photo Credit: Courtesy of Pyramid Fly Co. 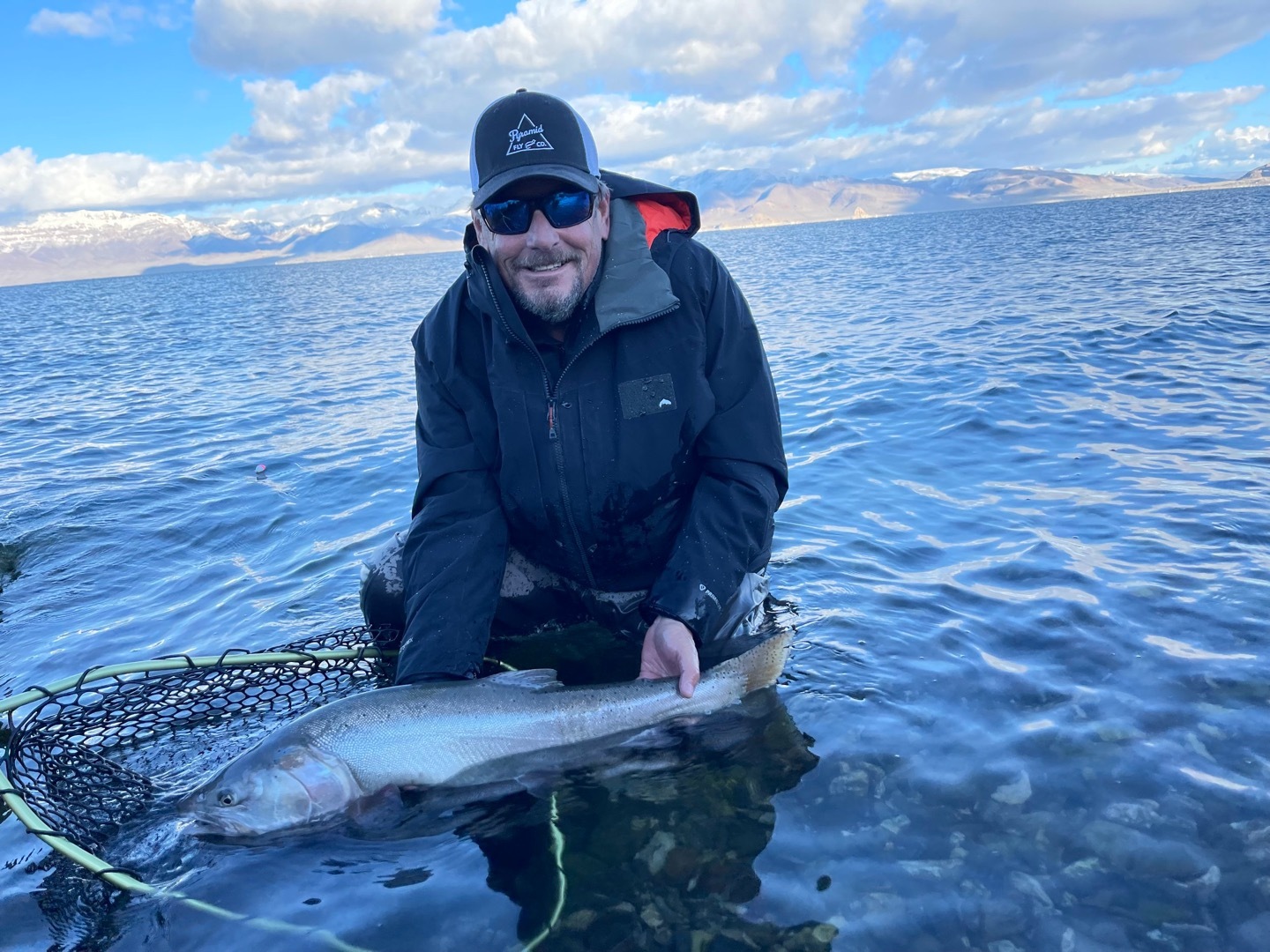 Capt finally got out of the shop
Photo Credit: Courtesy of Pyramid Fly Co. 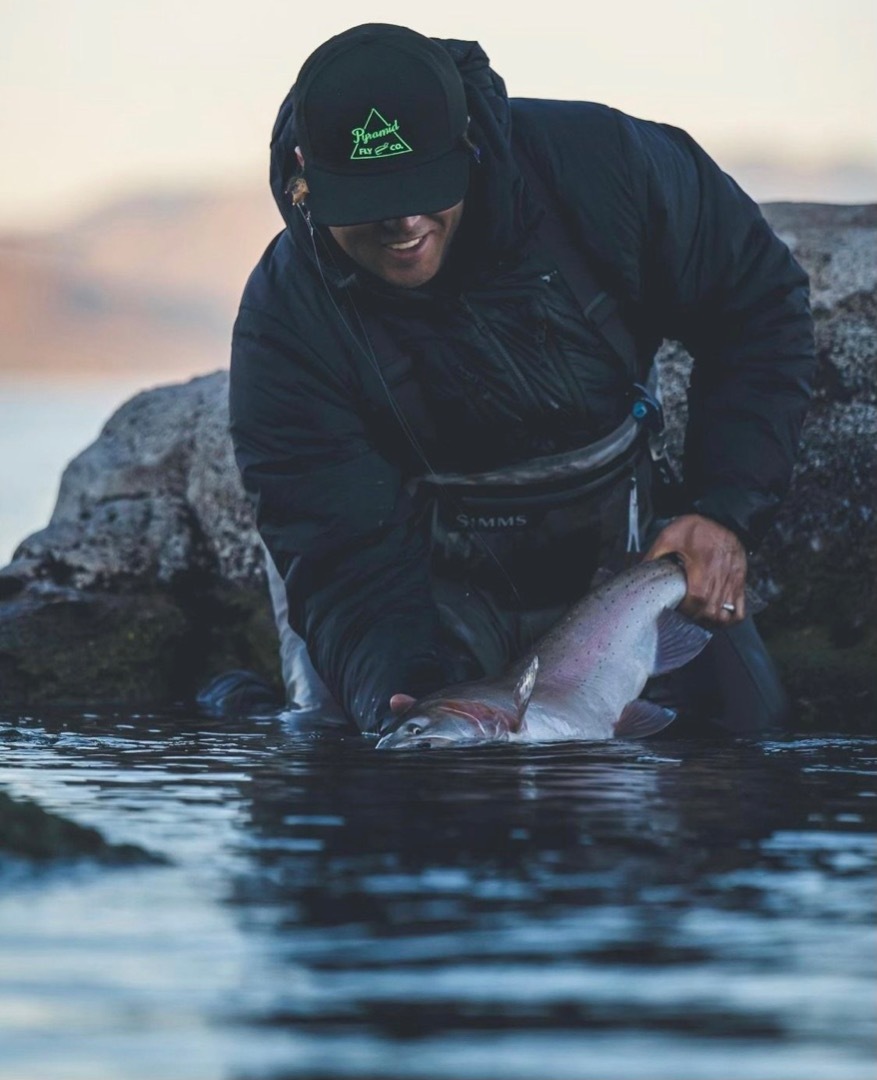 The bite is picking up slowly, but surely 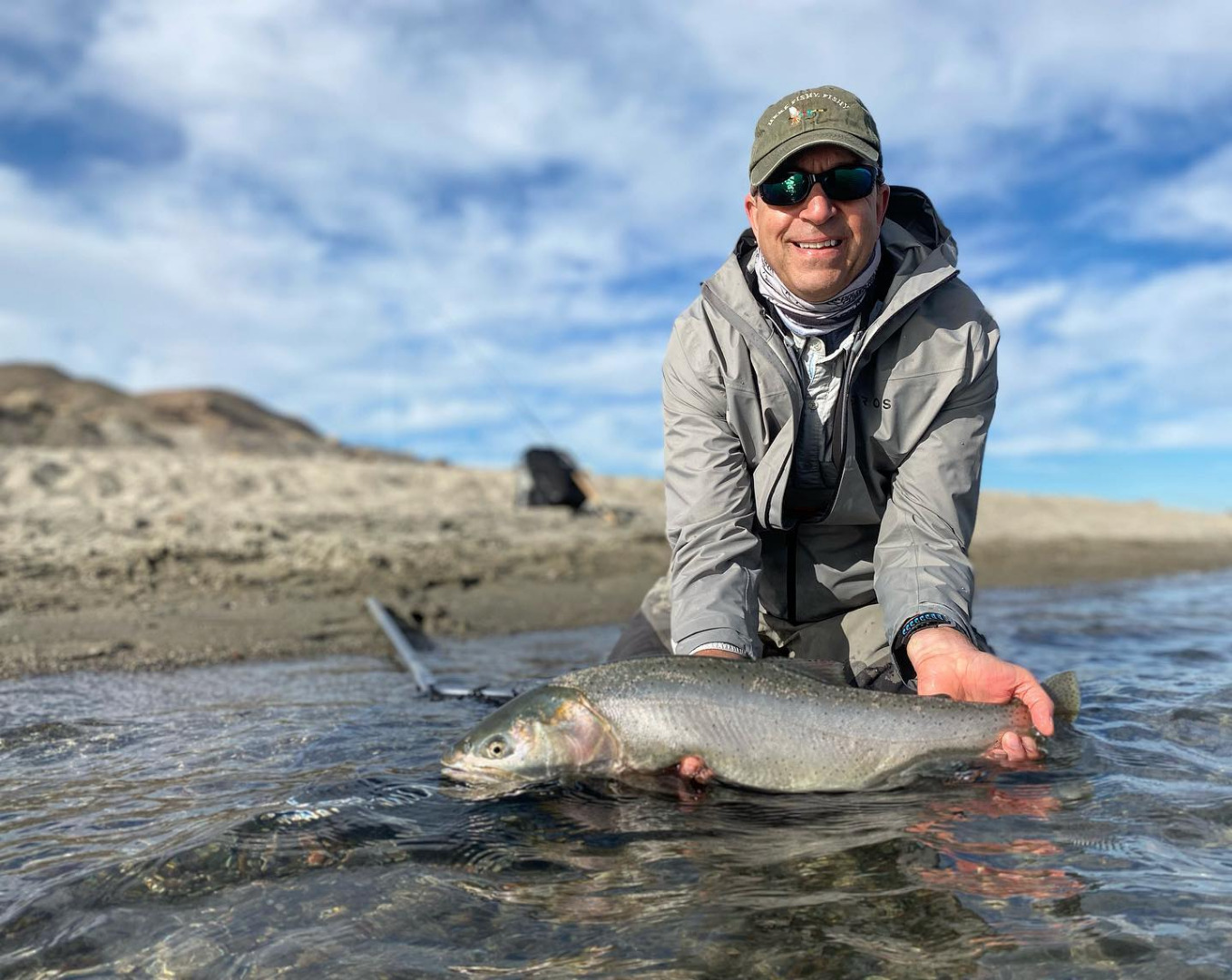 11-30-2021
The bite is picking up slowly, but surely. The cool mornings are dropping the water temps rather slow with these...... Read More

Some nice fish on the chew 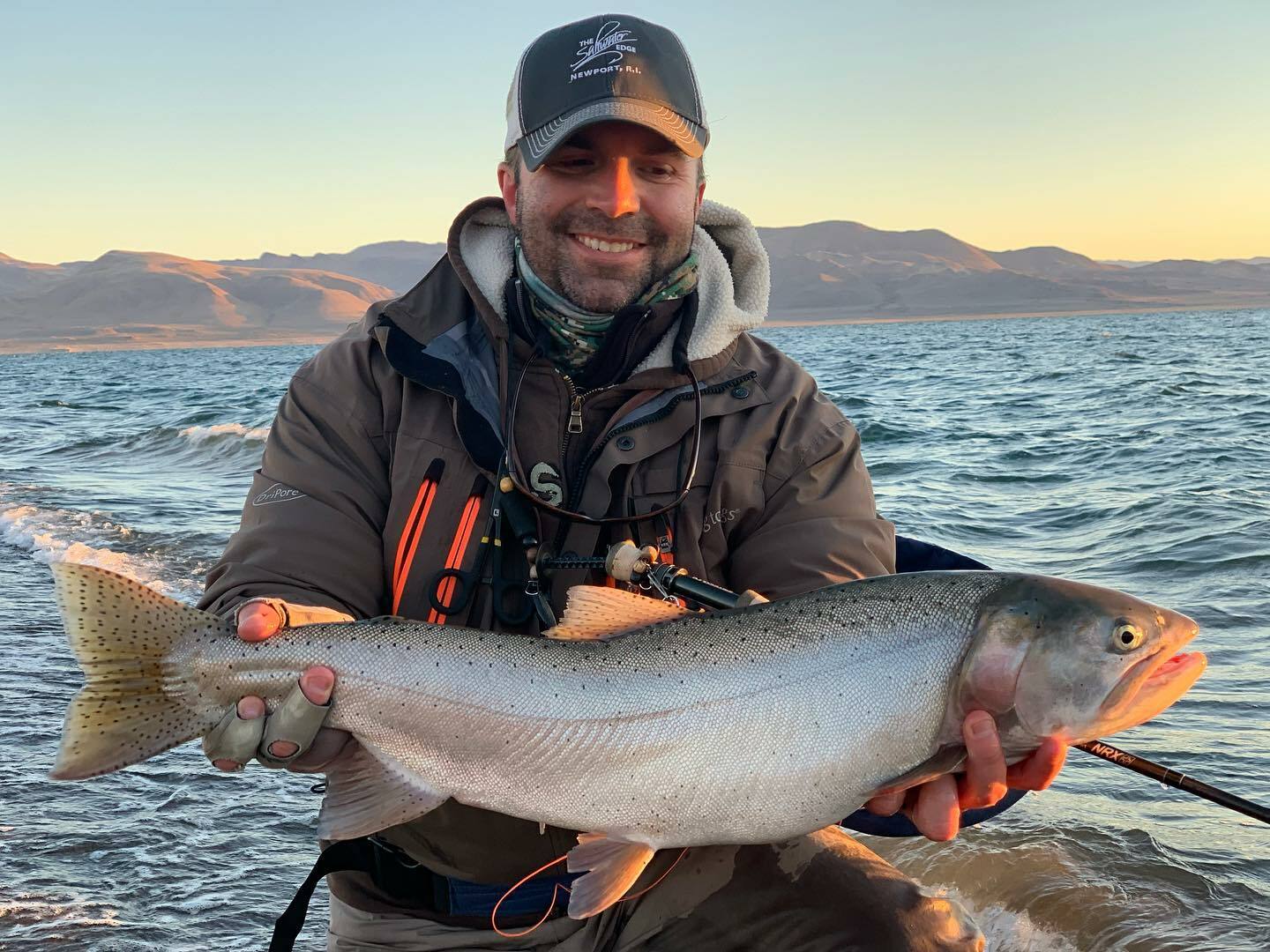