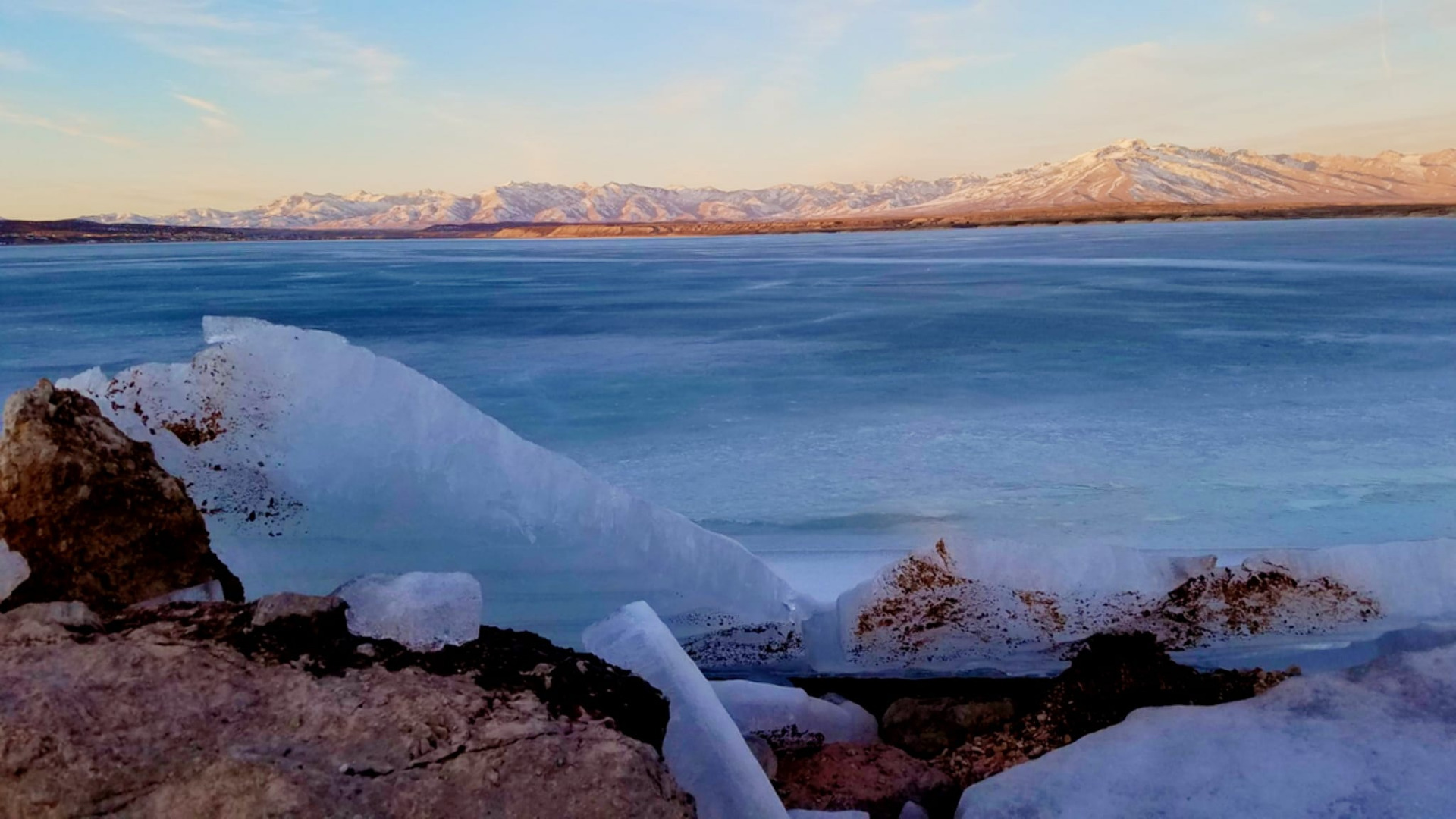 The water levels continue to drop at Cave Lake in an anticipation of renovation efforts on the dam in this year. The lake is closed to fishing at this time. NDOW conducted a fish salvage in December and moved some very nice brown trout ranging in size from eight to 25 inches into Comins Lake. A few of the larger brown trout were pushing seven pounds. Cave Lake is closed to fishing due to shorelines that are very soft and dangerous due to the complete saturation of the soil as the lake is drained. By draining the lake, it should shave a couple of years off the re-building of the dam and cut costs tremendously. It will also make the project much safer for those performing the work.

Cold Creek Reservoir was salvaged so that water control structure could be fixed to prevent leaking. When the control structure is fixed, the reservoir will be filled and NDOW will begin rebuilding the fishery in spring or summer of 2022 depending upon water conditions.

No change here. The ice at Comins is ranging between 10 and 15 inches of good hard ice, averaging 13 inches. There are some slick spots with the warm afternoons melting the surface and then refreezing overnight. Traction devices on boots are recommended. While the fishing was slow at the Ely Rotary Club Ice Fishing Derby, anglers continue to report fair to good fishing for 14 to 18-inch rainbows on night crawlers at other times. The south end of the lake appears to be producing more fish than the north end where the Derby was limited to. Nightcrawlers seem to be the bait of choice though some anglers also appeared to be doing well using PowerBait. Soft plastic jigs tipped with a worm should also be effective. Pike anglers have had some success using artificial minnows or spoons jigged through the ice for 12-to-18-inch fish. Anglers, please note that NDOW has placed radio tags in several Northern Pike. These pike will have an orange Floy tag near their dorsal fin and a small antenna (~ 7 inches long) coming from their stomach. Please return these fish to the water for research purposes. All other pike should be humanely dispatched. There is no limit on the pike.

The road into the lake has been plowed and in good shape. There is eight to 13 inches of good ice with some slick ice on the surface. Traction devices on boots are recommended. No recent report from anglers but expect good fishing for trout in the 12 to 15-inch range. The usual nightcrawlers or PowerBait should work here as well as dark colored soft plastic jigs tipped with a worm.

Not much change here as many streams are still mostly covered in ice with open water where flows are faster. Flows appear to be increasing with the warmer weather melting some of the snowpack. Shorelines are snow and ice covered and very slippery. Access is iffy to many of these waters so leave a trip plan and be prepared to spend the night. Anglers need to go into Idaho to access the Bruneau and the Jarbidge. With colder water temperatures expect stream fishing to be slow. Fish the deeper pools and slower water (if open) where the fish hang out this time of year to conserve energy. As of February 11, the East Fork of the Owyhee near Mountain City was showing ice but expect flows around 30 to 35 cfs, the Bruneau River is also showing ice but expect flows around 20 to 25 cfs, the Jarbidge is another water showing ice, but expect flows between 5 and 10 cfs, Salmon Falls Creek double from last week at 68 cfs, Lamoille Creek at 4.7 cfs, the South Fork of the Humboldt between 10 and 15 cfs, Cleve Creek at 4.9 cfs, Steptoe Creek at 1.9 cfs and Kingston Creek at 2.7 cfs.

Someone punched through the drift at the top of Harrison Pass, but it is still iffy to go over the pass.  Only those vehicles with high clearance and good tires should attempt it.  There are still some drifts on the west side of the pass that could cause some problems.  Carry chains and a shovel.  It is still advised to use Secret Pass.  The roads in Ruby Valley are in good condition. With the warmer weather there is plenty of open water in the collection ditch for fishing.  Fishing has been fair for 13 to 16 inch fish depending upon the day and location on the ditch.  A few in the 20 + inch range are occasionally reported.   With the cold-water conditions fish deeper areas and springheads where the water is a bit warmer. Chironomid patterns such as zebra midges, Yankee buzzers, chromies and ice cream cones should work. Other flies such as Leech patterns, balanced leeches, crystal buggers, #14-16 hare’s ears, and #16-18 PT nymphs and chironomids under an indicator are recommended.  Egg patterns can be effective this time of year here.  Spin anglers should be using small spinners in black or olive with contrasting yellow or red colors.  There is approximately three inches of unsafe gray porous ice at the boat ramp.  Not worth going on especially with all the springs there will be weak spots.

As of Friday, February 11, the lake was ice covered with ice that is still five to eight inches of gray, porous ice with little to no snow on top making it very slick. The edges are getting soft in the afternoon and there is standing water on the ice. Anglers are warned to stay off the ice at South Fork, especially the warm weather forecast. If the warm weather continues, there may be some open water for fishing in a few weeks.

Very little change here as the ice is averaging 13 to 15 inches of good clear ice. With the warmer weather the surface is melting during the day and freezing at night causing slick walking conditions in many areas. Fishing for trout continues to be good using PowerBait or worms fished about four to six feet below the ice though a few are being caught throughout the depths. Trout have been averaging 15 to 20 inches with a few in the 20+ range. Perch fishing has been good for numbers but most are smaller and it takes a lot of catching to get a few keepers. The larger perch generally are deeper in the water column, often 25 to 35 feet deep, the best fishing for the larger fish is further from shore so anglers do need to head out from shore into deeper water. For perch fish within a foot of the bottom in 25 to 35 feet of water using small plastic jigs tipped with a piece of worm. A slight jigging action occasionally helps. If you are catching mostly small ones, move as they generally school by size. Those anglers willing to move and punch a lot of holes in the ice eventually start catching keepers, but not a lot of them. The ice skating rink by the state park boat ramp is in great shape so bring your skates. The State Park Campground is open on a first come first served, with the loop closest to the boat ramp open for campers.

No recent report but expect similar conditions as at South Fork. The road to Wilson is more than likely 4WD only with the snow and mud. 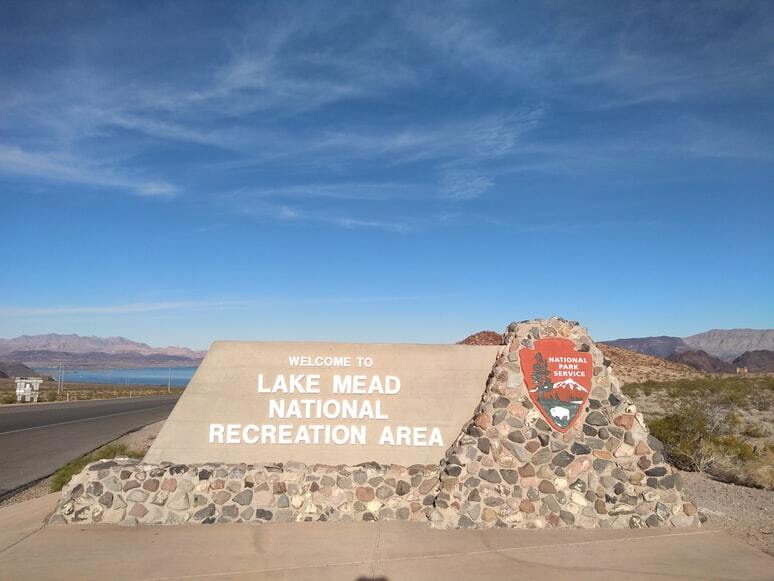 Lake Mead: Striped bass are biting anchovies along the beaches near Hemenway
Lake Mohave: Reports of striper catches are coming in at the lake's north and south ends
Colorado River - Laughlin: Rainbow trout have been the main catch on the river
Las Vegas Urban Ponds: Night crawlers and mealworms are the go-to bait for catching stocked trout
Kirch Wildlife Management Area: Some portions of the reservoirs have open water
Eagle Valley Reservoir: Ice was still thick enough for groups of anglers to get together on the ice this past weekend
Echo Canyon Reservoir: Visitors are still seeing ice along the edges
: NDOW Southern Fishing Report