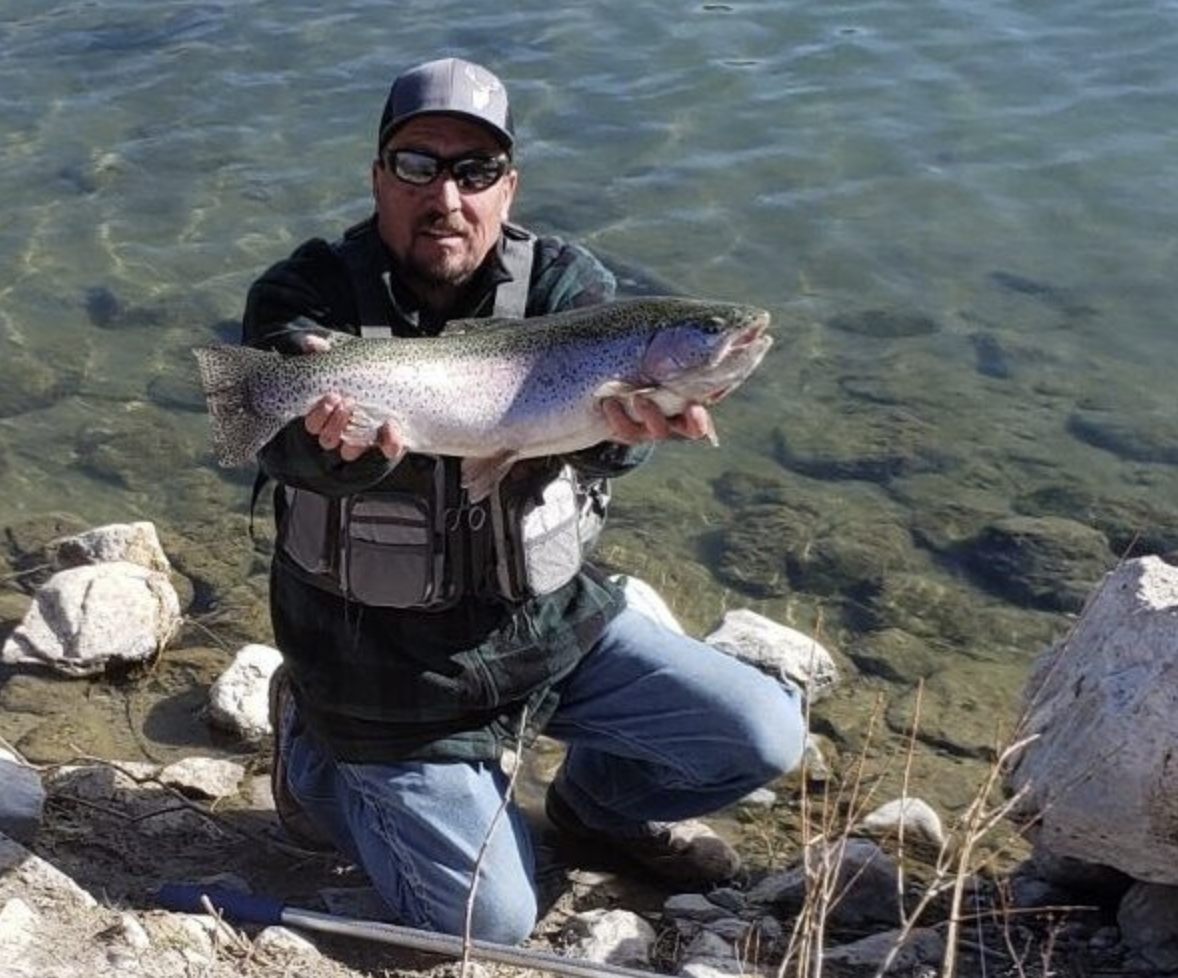 This winter repairs to the outlet structure and the reservoir bottom were completed, thanks to Kinross Gold. The reservoir is filling nicely and should allow for normal stocking this spring. NDOW will begin rebuilding the Largemouth Bass fishery with augmentations this summer.

The lake is ice free and the new boat dock is in the water and ready for boaters.  Anglers report good spring fishing for quality rainbow trout from shore with reports of a few tiger and brown trout being caught.  Nightcrawlers seem to be the bait of choice though some anglers also appeared to be doing well using PowerBait or using a bubble with a wet fly beneath it. Surface water temperatures are starting to move into the mid 40’s. For fly rodders, this time of year chironomid patterns are recommended as they can make up as much as 80% of the trout’s diet in the spring in our high desert reservoirs.  Black or olive wooly buggers and black, olive or wine-colored leech patterns may also entice trout.  Pike anglers have had some success using artificial minnows or spoons jigged through the ice for 12-to-18-inch fish.  Anglers, please note that NDOW has placed radio tags in several Northern Pike.  These pike will have an orange Floy tag near their dorsal fin and a small antenna (~ 7 inches long) coming from their stomach.  Please return these fish to the water for research purposes.  All other pike should be humanely dispatched. There is no limit on the pike.

The lake ice free.  Illipah continues to recover in water capacity after last year’s irrigation season. The reservoir is at approximately 60% of capacity. Anglers will do well with a variety of night crawlers, PowerBait, and spinners. Where possible, try casting onto the ice as it recedes and letting the bait or lure fall off the edge before reeling in. Trout like the security of the ice overhead and will watch the open water for food.  For bait anglers nightcrawlers and rainbow PowerBait are the best bet. Small spinners, spoons and Kastmasters in gold for those throwing hardware should work.  For fly rodders, this time of year chironomid patterns are recommended as they can make up as much as 80% of the trout’s diet in the spring in our high desert reservoirs.  Black or olive wooly buggers and black, olive or wine-colored leech patterns may also entice trout.

The lake is ice free, nearly full and anglers are catching trout.  The surface water temperatures are still in the high 40’s.  Worms seem to be the presentation of choice, though small spinners should also work for those who want to throw some hardware.  Fly rodders should be using chironomids, PT nymphs, hare’s ears, small black or olive buggers and leeches.

In the eastern region stream flows are up over last week due to the warm weather. While some streams are still below the median for this time of year others have improved to near normal with the snow melt. Anglers can now access the Bruneau over the Gold Creek Road, though still no word on getting to Jarbidge through Nevada. Expect springtime snow, ice and muddy driving conditions into some of these streams, though roads are drying out. The East Fork of the Owyhee immediately below Wildhorse Dam is flowing at a trickle as little water is coming out of the dam. As you go further downstream flows pick up considerably and by the time you get close to Mountain City it is greatly improved. The pool at the dam is still holding fish and is providing action for anglers using nymphs and streamers. As of April 1, the East Fork of the Owyhee near Mountain City gauging station was flowing at 117 cfs, the Bruneau River flowing at 118 cfs, the Jarbidge was flowing at 23.8 cfs, Salmon Falls Creek at 326 cfs, Lamoille Creek at 14.7 cfs, the South Fork of the Humboldt at 30 to 35 cfs which is well below the median of 110 cfs for this time of year, Cleve Creek at 4.5 cfs, Steptoe Creek at 2.1 cfs and Kingston Creek at 3.3 cfs.

Harrison Pass is open for driving to the marsh and in good shape.  Not much has changed as far as fishing conditions and like the rest of northeastern Nevada the waters are ice free.  Fishing has been fair to good for 13 to 18-inch fish depending upon the day and location on the ditch.  Chironomid patterns such as zebra midges, Yankee buzzers, chromies and ice cream cones should work. Other flies such as leech patterns, balanced leeches, crystal buggers, #14-16 hare’s ears, and #16-18 PT nymphs fished under an indicator are recommended.  Very small dry flies have also been effective on these warmer afternoons.  Size 16 to 20 elk hair caddis, blue winged olives, ants and Griffith’s gnats should all be effective. Spin anglers should be using small spinners in black or olive with contrasting yellow or red colors.

Little has changed in fishing conditions and the fishing has been good for trout at South Fork. The water temperature has moved into the mid to high 40’s.  Fishing has been good for spin, bait and fly rodders with most anglers fishing from Jet Ski Beach, on the northeast side of the lake and near the spillway on the northwest side of the lake and by the dam on the east side of the lake.  Bait anglers seem to be having the best luck with worms floated off of the bottom about 20-30 feet from shore.  Spin anglers continue to report good luck with gold Kastmasters, spinners and small jigs. Fly fishermen report that fishing has also been good for trout in the 15 to 20-inch range. Most are being caught with chironomid (midge larva) patterns fished under an indicator. Black snow cones with a white bead and red wire ribbing have been working well. Red snow cones are also producing fish. Black, olive or purple wooly buggers and leech patterns have are also catching fish.  However, brown or root beer colored wooly buggers and leeches with some flash seem to be working the best for stripping.  A few smallmouth and wipers have shown up in the creel.  Male bass are starting to transition from the deeper water to the spawning beds hanging in about 15 to 20 feet of water.  The wipers were caught near the surface, but in the middle of the south end of the lake.  If targeting these warm water fish, slow down the retrieve as the water is still well below their comfort zone and they are moving slower.  Chartreuse was working for the wipers but no report on what was working for the black bass.

The Horse is ice free and fishing has been good this week with fly rodders reporting good fishing.  No reports from spin or bait anglers.  Those who have a boat will find that the west side of the lake has been producing fish averaging 14 to 18 inches with an occasional 20 incher caught.  Generally this time of year fishing in the coves provides better success.  Fly fishermen have been having good luck with wine colored leech patterns as well as wine or red chironomids with silver wire and a silver bead.  Olive leeches and buggers have produced a few fish as well.  For bait anglers try fishing an inflated worm a few feet off the bottom using a slip sinker in water that is four to 10 feet deep.  Don’t fish it too far from the bank, 20 to 30 feet at most. Another option would be to roll some PowerBait to make a bell shape and fish it in a similar fashion to the inflated worm using a slip sinker and it will float up a couple of feet above the bottom.  Make sure to dip the PowerBait in the water for a few seconds after it is on the hook to “gel” it up so it doesn’t come off the hook when casting.

The road is in good shape and the lake level is low with the water just starting to touch the concrete at the very bottom of the boat ramp. There is not enough to launch a boat.  Like South Fork the lake is ice free.  Reports show good fishing for 13 to 16 inch fish using olive leeches and buggers.  No reports on bait or spin anglers but generally this fishes very much like South Fork so the colors and presentations that work there should work here.  Since the big question every spring is when will the lake spill, with the low water levels and lack of snow pack, it probably won’t spill this year.  Wilson was planted with approximately 12,000 trout on April 1. 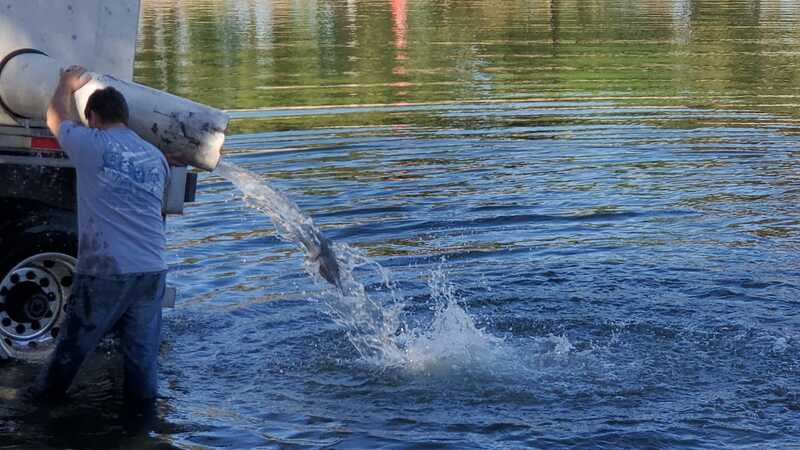