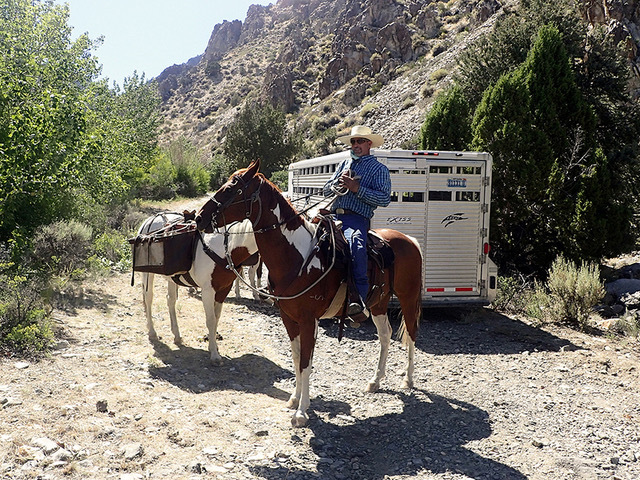 Tonopah native Bryan Perchetti, prepares to pack a load of brook trout fingerlings into the North and South Twin Rivers in the Toiyabe Range north of Tonopah. By days end, Perchetti and his wife Tansy, helped the Nevada Department of Wildlife plant 3,000 fish in these high-mountain streams. (Mark Beckstrand, NDOW)
Photo Credit: Courtesy of NDOW

In a scene reminiscent of the ‘old days,’ a small string of pack laden horses recently made their way into the rugged Toiyabe Mountains of central Nevada. Their precious cargo was neither gold nor silver but rather a load of brook trout fingerlings bound for two of the many small streams that can be found in that part of the Silver State.

Two streams and four roundtrips later, the Nevada Department of Wildlife had successfully released 3,000 fingerlings in the North and South Twin Rivers about 70 miles north of Tonopah. Each stream received 1,500 of the colorful fish that NDOW trucked in from a hatchery in Ogden, Utah. The plant took place July 8.

The agency’s goal is “to restore angling opportunity at some of the higher elevations” said Mark Beckstrand, fisheries biologist for NDOW. “Locals who frequent these high mountains said they used to fish those areas, but drought caused some of the streams to dry up or become intermittent, and a lot of fish were lost.”

This project was a joint effort between NDOW and Bryan Perchetti, an outdoor enthusiast whose family has lived in the Tonopah area for four generations. He and his wife Tansy provided the pack horses, labor, and encouragement for the fish plant.

Beckstrand said that brook trout are a hardy fish, “The hope is they’ll reproduce on their own and kind of build up the fishery.”

Perchetti realizes the restoration process is just that, a process that is going to take a while and will surely benefit from a little luck. “I think they’ll come back. It’s just going to take some time, and Mother Nature’s got to cooperate a little bit to help us out.”

Anglers looking for a stream fishing experience in Nevada can find it in the Toiyabe, Toquima and Monitor mountain ranges with many of the streams in those ranges holding fish. Beckstrand said if they have never dried up the streams will hold brook or brown trout, and many have both.

“You aren’t going to catch giant fish by any means, but there’s plenty of fish to be caught,” Beckstrand said of what he describes as a high-elevation, backcountry fishing opportunity. “You can drive to the mouth of the canyon but then its trails and hiking the rest of the way.”

“In these small Nevada streams, it’s pretty brushy. You’ve got to fight the brush, and that can make things a little bit difficult, but if you’re patient, and you’re quiet, and sneak around, there’s some really decent holes that hold really nice fish.”

NDOW does plant rainbow trout on a regular basis in some of the lower elevation streams that are more easily accessible. Those include Peavine Creek, Pine Creek, and Barley Creek.

The Nevada Department of Wildlife (NDOW) protects, restores and manages fish and wildlife, and promotes fishing, hunting, and boating safety. NDOW’s wildlife and habitat conservation efforts are primarily funded by sportsmen’s license and conservation fees and a federal surcharge on hunting and fishing gear. Support wildlife and habitat conservation in Nevada by purchasing a hunting, fishing, or combination license. Find us on Facebook, Twitter or visit us at www.ndow.org