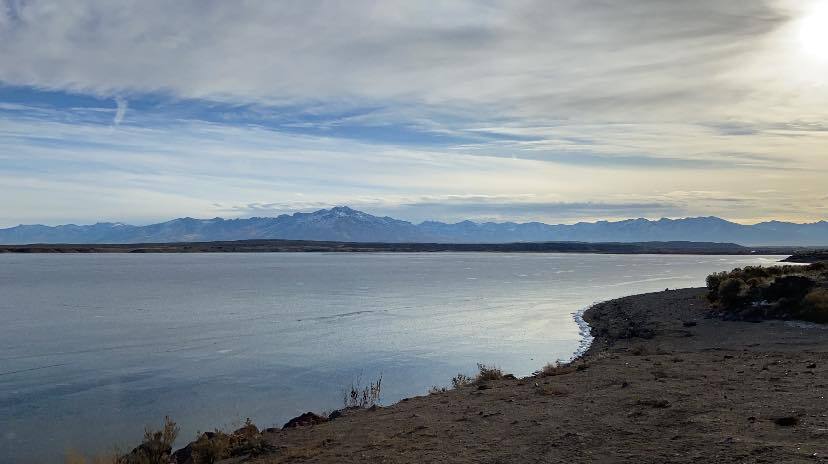 ICE UPDATE: The reservoir is roughly 95% covered in ice now. It is still not very thick, even on the edges, so please do not venture out there. Fishermen, there are a few spots of open water left located by the Saddle Dam parking area on the East Side of South Fork, as well as Coyote Cove on the Southwest Shores. Not sure how long it will stay open for but the early bird gets the worm!
Photo Credit: Courtesy of South Fork State Recreation Area

Last week we talked about ice thickness and what is safe and what is not.  Obviously, there are anglers in the area who don’t read this column, like to live dangerously, and they were ice fishing this past week on Wildhorse.

As stated last week, the most dangerous times to be on the ice is early in the ice season (now) or late in the ice season (spring) when ice conditions can change very quickly.  What I failed to mention is that not only can it change daily with weather conditions, but the thickness can vary depending where upon the lake you are.  In some cases, ice can be four inches thick in one spot and just a few feet away it may be only one or two inches.

With a lack of snow on the ice to insulate it pressure ridges can become very dangerous spots on the lake.  During the day as it warms up with the sun beating on it, ice starts to melt and contrary to what we may think, it contracts.  At night when it gets very cold the ice expands causing cracks that buckle making the pressure ridges.

These pressure ridges become weak spots on the ice and should be avoided, especially when the ice is thin early in the season.  The cracking along the ridge weakens it considerably for several feet on either side of the ridge.  During the day, some even open up causing gaps between two sheets of ice that you can fall through.

Moral of the story is that the ice on Wildhorse Reservoir is unsafe at this time.  If the snow predicted for the area next week comes to fruition, and the cold nights continue, it should be safe for ice fishing sometime around the week of Christmas.  South Fork ice probably won’t be safe until after New Year’s

The reservoir is currently sitting at approximately 40 to 50% of capacity and is mostly ice free with shore access for fishing.  No report on fishing conditions but expect it to be slow to fair.  The usual worms or PowerBait would be a good place to start.   A total of 4,050 Rainbow Trout were stocked into the reservoir in 2020.  Expect some skim ice along the shore in the mornings, but open water for much of the da

Comins is mostly covered with five to six inches of safe ice though there are some isolated  spots that have open water and/or thin ice.  Please advance cautiously and drill a test hole or two in the area you want to fish.  Worms seem to work best through the ice though PowerBait can work as well.  Jigging with minnow imitations can also work.  Anglers please note that NDOW has placed radio tags in several Northern Pike.  These pike will have an orange floy tag near their dorsal fin and a small antenna coming from their stomach. Please return these fish to the water for research purposes.  If it doesn’t have the transmitter tag, please humanely dispatch the fish.  Don’t put it back in the lake

Illipah is covered in unsafe ice.  Expect it to be unsafe for a couple of weeks.

As of Tuesday, December 8, this water was 80% ice covered with unsafe ice.  There was no open near shore, so fishing is done here until ice is safe, which should be sometime between Christmas and New Year’s depending upon the weather.

The colder water temperatures and nights below freezing have shut off hatches in area streams. Higher elevation streams have snow and ice bank conditions making fishing difficult.  With the colder temperatures, stream fishing is slowing down.  Expect the fish to be sluggish and anglers will need to put their presentations right in front of the fish and work it slowly.  Stream flows are down a bit due to the colder temperatures forming ice. As of December 10, the East Fork of the Owyhee was flowing at a low 9 cubic feet/second (cfs), the Bruneau River showing ice, the Jarbidge at 7 cfs, Salmon Falls Creek at 54 cfs, Lamoille Creek showing ice at the gauging station, the South Fork of the Humboldt showing ice, Cleve Creek at 5.5 cfs, Steptoe Creek at 3 cfs and Kingston Creek at 2.5 cfs.

The collection ditch was mostly ice free as of December 10.  Fishing has been good for 10 to 16-inch trout at the collection ditch which was stocked with approximately 7,000 trout in October.  Water level in the collection ditch has improved but it has been a bit turbid which is good news for anglers. Small brightly colored spinners were doing well. Anglers need to use sub-surface flies such as leech patterns, wooly buggers or crystal buggers.  Other flies working include the usual small nymphs such as PT’s, hares ears, olive soft hackles, red or blue copper Johns, prince nymphs and egg patterns. Governor’s Pond has been stocked and fishing has good there.

As of Wednesday, South Fork was 90% covered in unsafe ice.  The only open water for shore fishing was at Jet Ski Beach and fishing was slow.  If there is still open water there this weekend, the usual rainbow sparkle PowerBait fished off the bottom using a slip sinker should work.  Worms can be tried as the sun gets high in the sky and things warm up.  For fly rodders chironomid patterns, copper Johns, small hare’s ears, pheasant tail nymphs and balanced leeches should be tried.  Fishing below the dam in the river has been slow with very low flows. South Fork was stocked with almost 107,000 trout in 2020.

Wildhorse is covered in unsafe ice with pressure ridges.  No fishing reports from here until it is safe, which will probably be around Christmas. Once the ice is safe expect fishing for both perch and trout to be good.  Fall surveys showed good numbers of quality healthy trout and lots of keeper sized perch in the creel.  The river below the dam has low flows and the shorelines are very icy but fishing the pools has been fair to good using streamer patterns and nymphs for fly fishermen and minnow imitation lures for spin fishermen.  Wildhorse was stocked with just over 100,000 trout in 2020.

No recent report, but this lake often mimics South Fork so expect it to be covered in unsafe ice. At last report, fishing was fair to good for 12 to 15-inch trout and bass fishing was very slow.  Black leeches  and chironomid patterns were working for trout. or dark green spinners with contrasting spots are working for spin fishermen.  For the most part, the same presentations that are used at South Fork, should work here.