January storms amp up the bite at Pyramid Lake 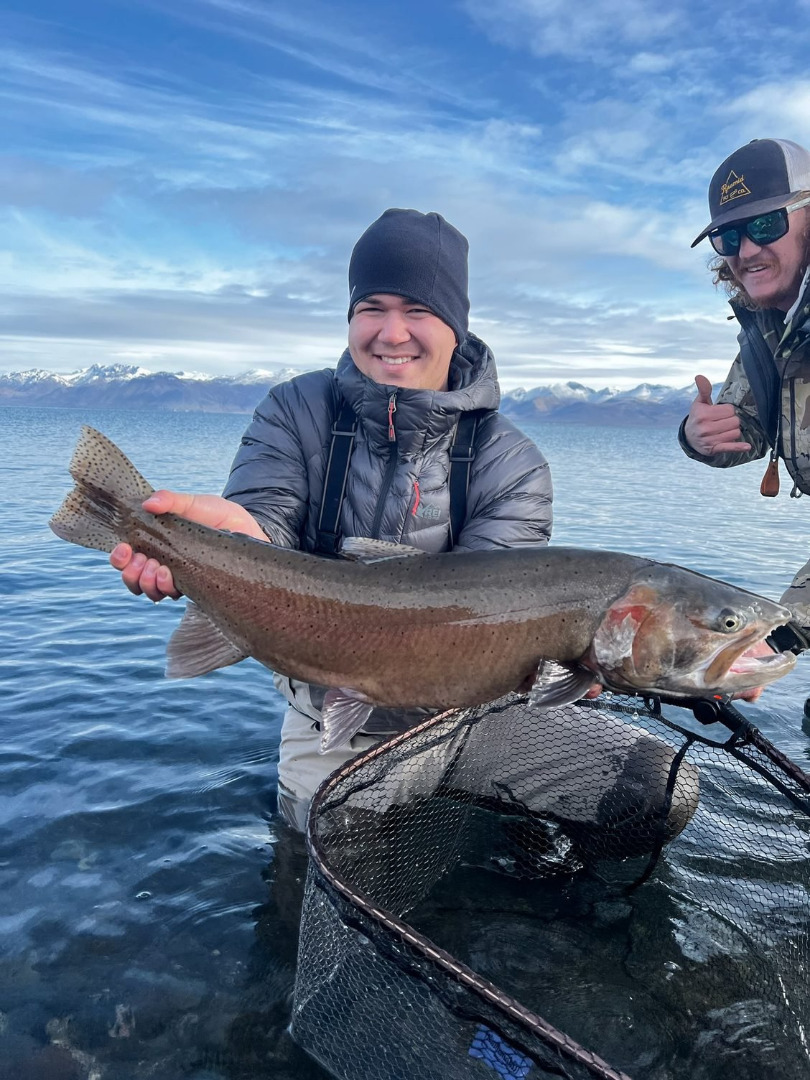 Repeated storm systems have these large cutthroat on the chew in a major way!  With the lake levels rising and the low pressure systems barreling in one after another, it has paired up for some feisty fish and a huge section of shoreline available for anglers with about 30 miles of beaches on the west shore of Pyramid Lake.  Head on out to your favorite beach or get out and explore a new beach that's peaking your curiosity.  The fish are still being caught from each end of the lake and everywhere in between.

The last couple weeks have been downright wild with some great number days and some nice fish hitting the net.  But it's always that one got away.  That large fish that pushes an insane amount of water as he swirls under the surface and rolls trying to throw the fly.  It's not the large gator roll on the surface where he's eventually lost, but that huge drag screaming run out to the deep part of the lake, only to turn around at the drop of a hat and charge right back at you.  In that brief moment of turn around, he's able to loose tension and pop that fly.  That moment where the angler feels complete loss of tension and pure heart break sets in.  That was a good one!  Those are the fish that leave us yearning for more.  Not the ones we catch, but the ones we lose are the fish that really etch their memory into our brains.

Last week, we have had some warmer mornings that have really got the midges popping early in the day.  It's that time of year where I can say with confidence that a double midge rig will out fish a leech rig.  Granted, those low light early and late hours can still produce a good leech bite, I prefer fishing two midges for the next couple months or so.  Get creative with it, think outside the box and tie flies for all types of weather.  Just because it works good on the cloudy days, doesn't mean it's going to fish in the sun.  Stripping buggers, beetles and boobies has been a bit more productive lately as well if you want to switch it up a bit.  Pick up that sink line and get to work!

The latter half of January can fish really well as the Pilot Peak strain tends to bulk up a bit before spawn, the crowds are a bit more manageable and the fish are still a ways away from spawn and have more energy than they know what to do with.  We still have some excellent days to fill the coming months and we would love to get you, your friends, family, dogs and kids out on the water.  After all, you can't catch em from the couch! LET'S GO!!! 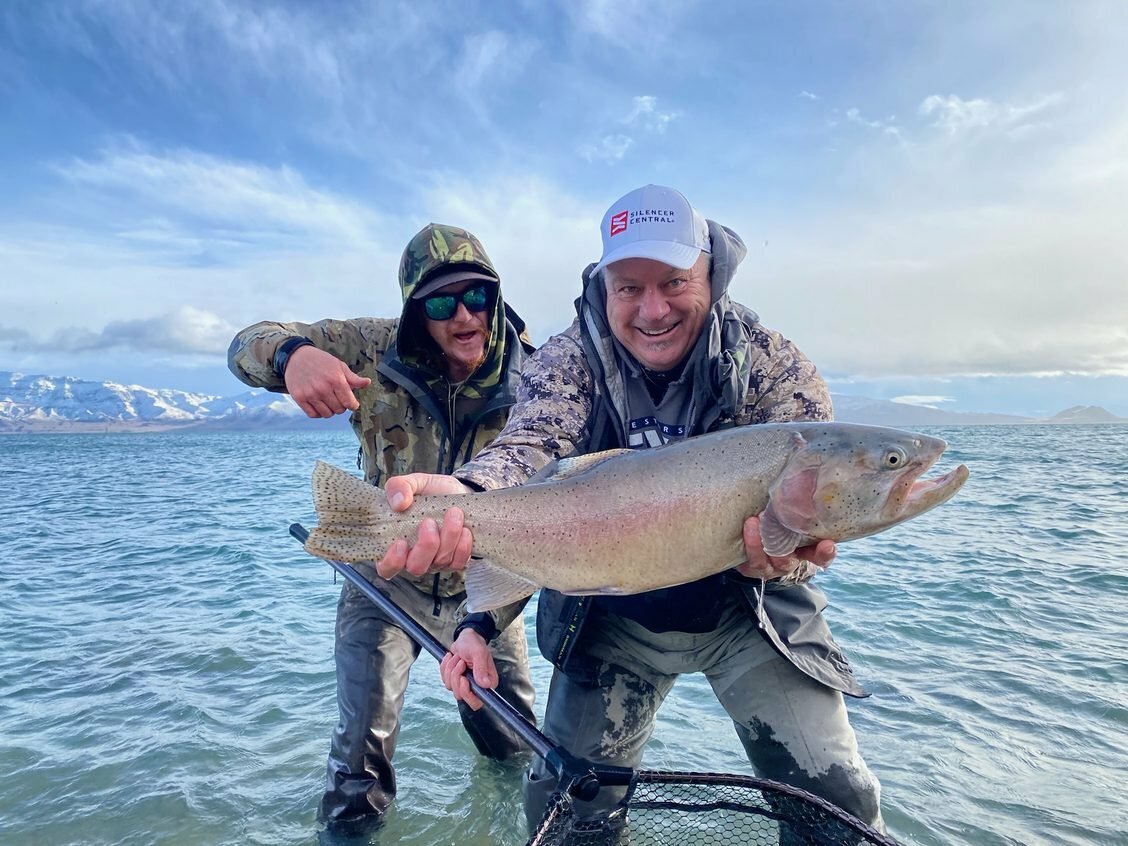 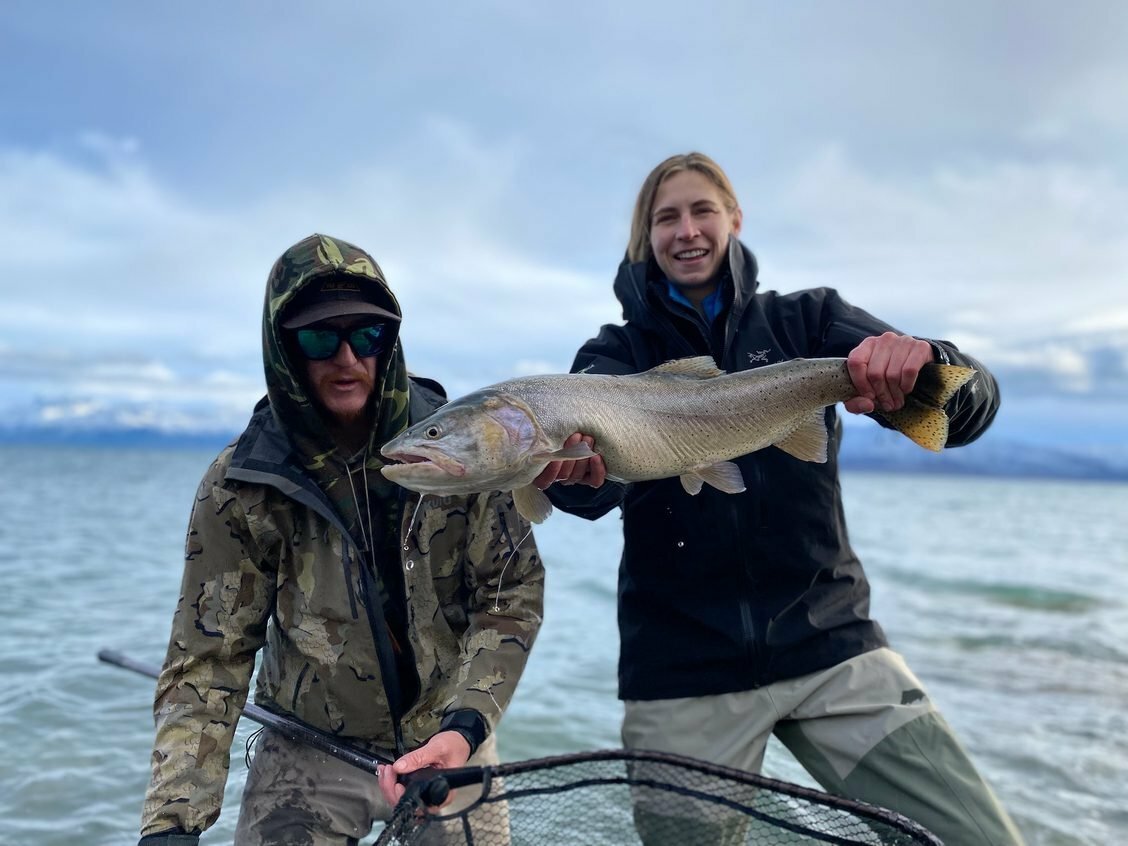 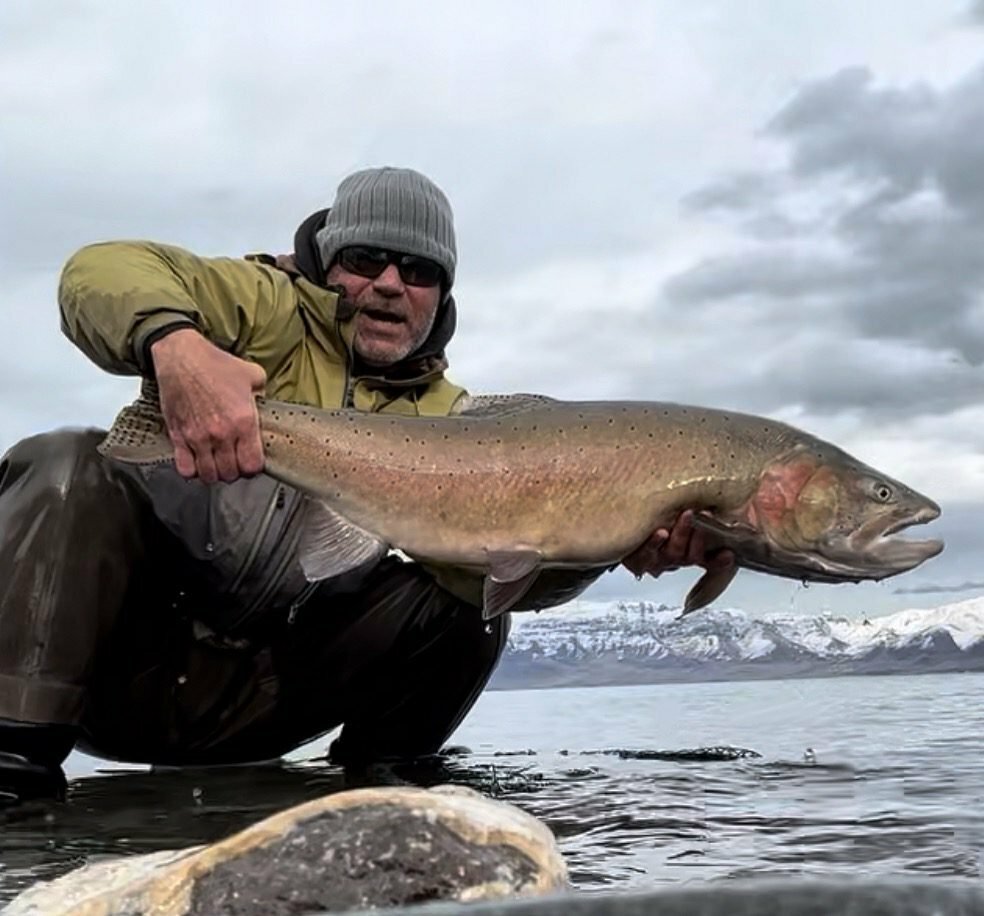 DARIN ROPED IN THIS HANDSOME PADDLEHAM 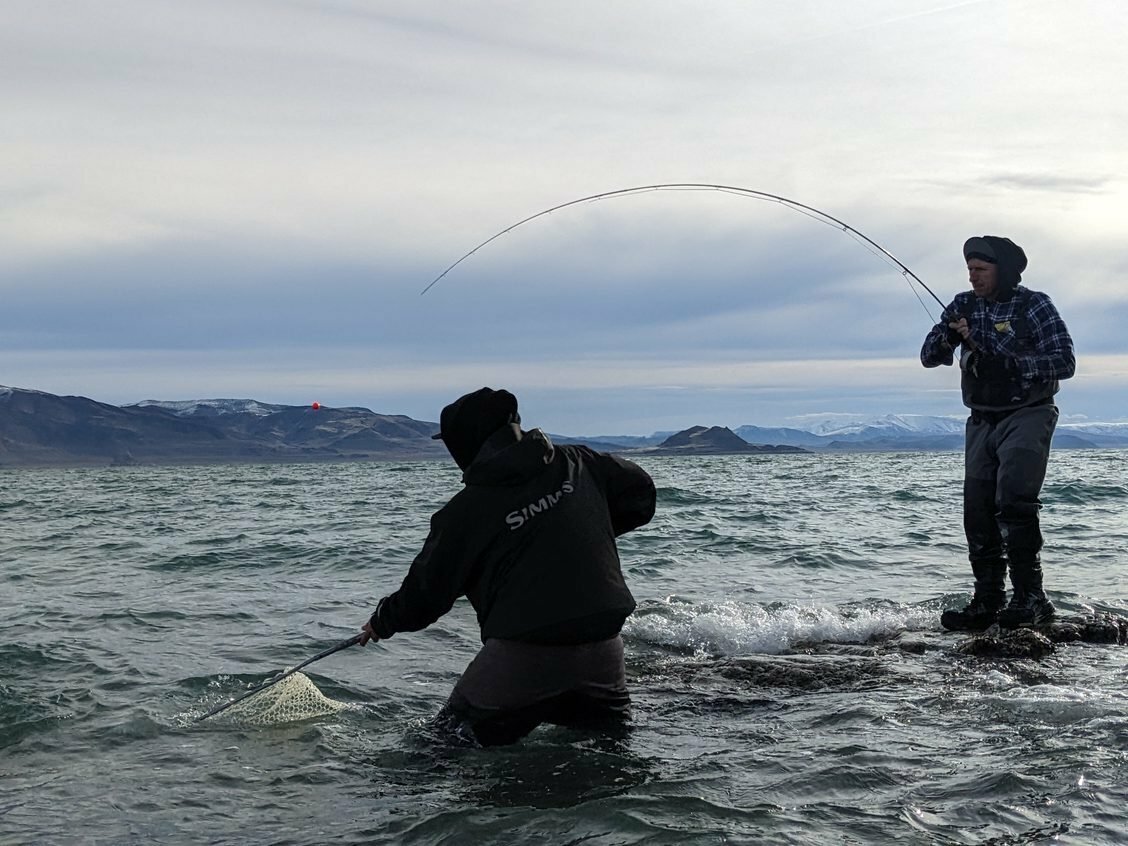 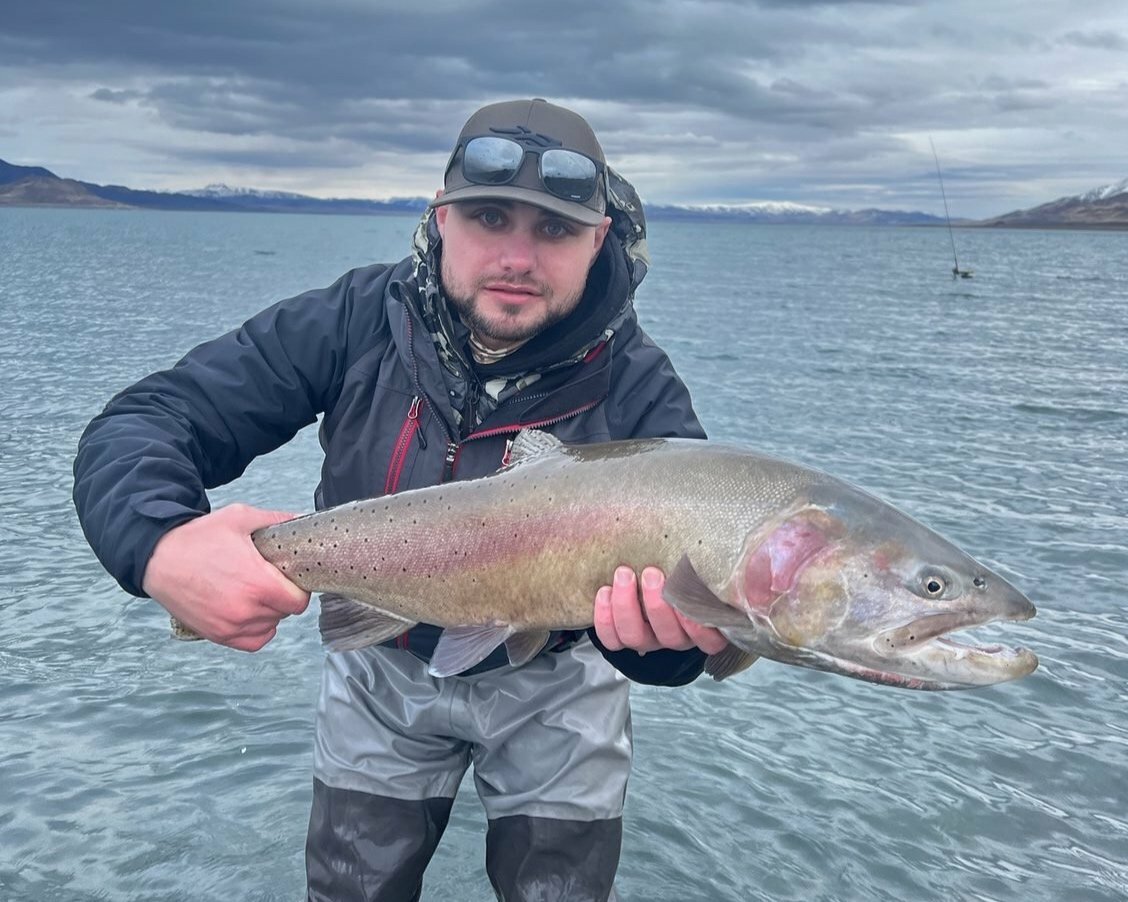 JASON FROM RENO DID A FINE JOB LANDING THIS BEAUTIFUL LCT.

The Return of the Midge 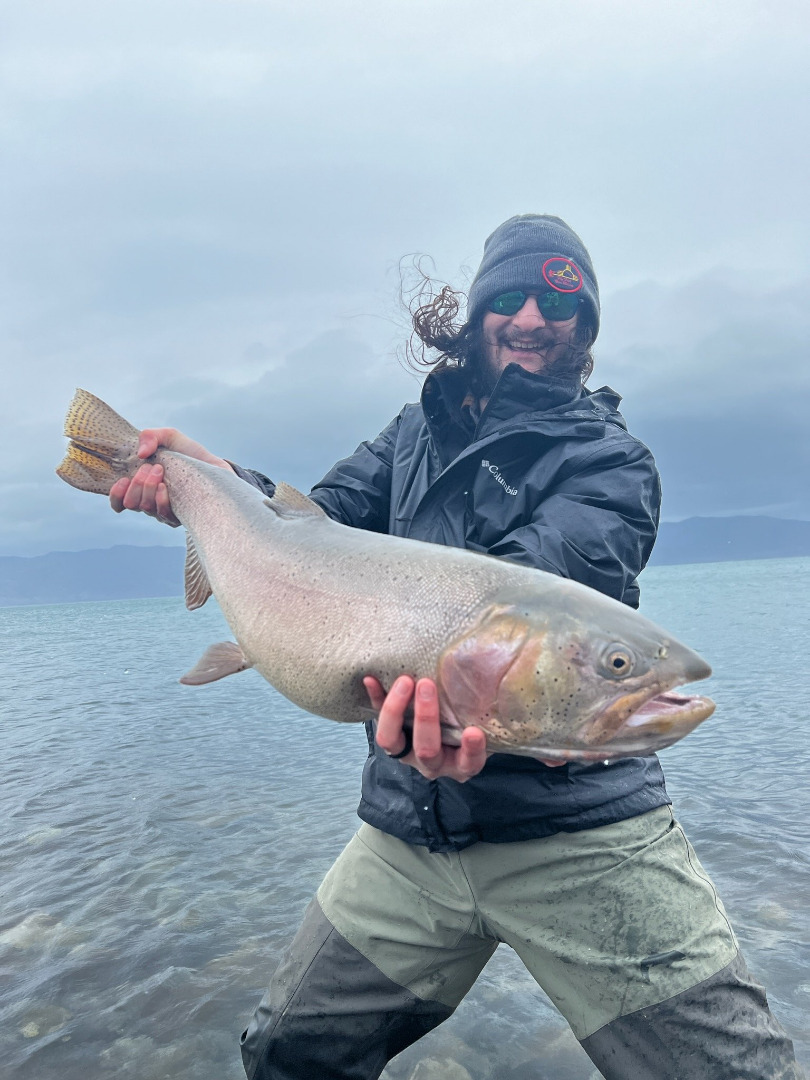 1-2-2023
The New Year brings a fresh opportunity to experience Pyramid Lake As we spring into the New year with tremendous amounts...... Read More

The cold has has transformed Pyramid Lake into a winter wonderland 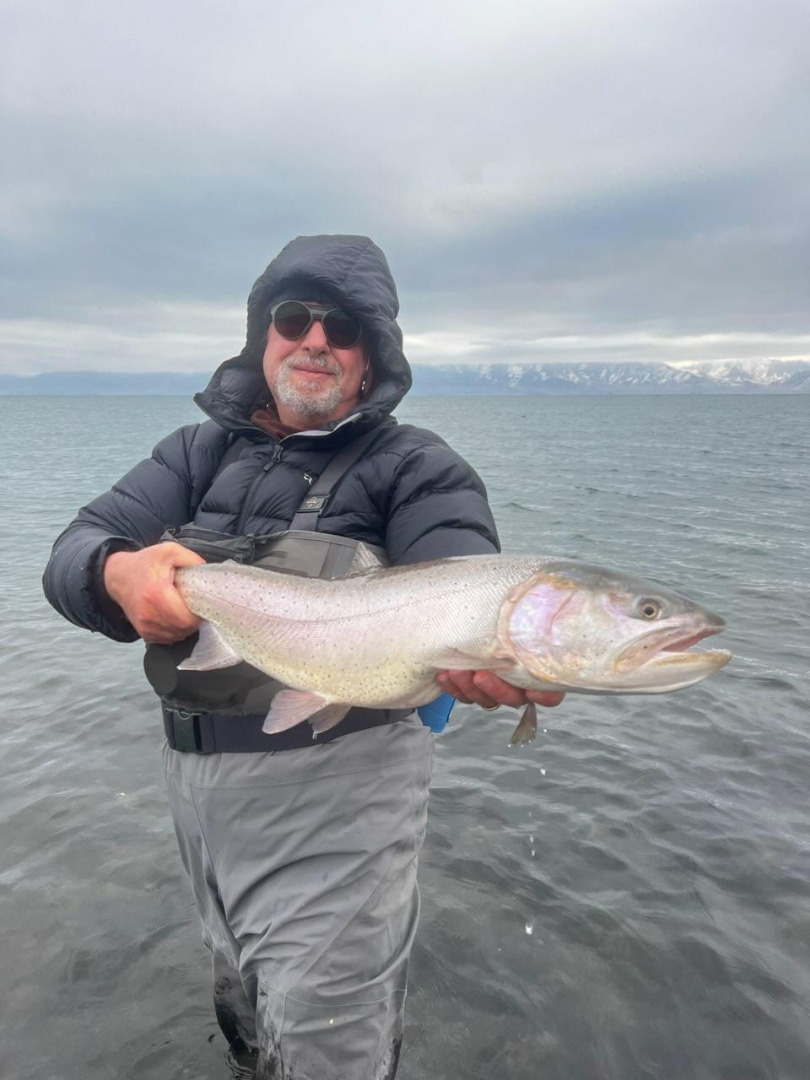 12-21-2022
Lake Conditions No denying that winter is here, and it’s cold embrace has transformed Pyramid Lake into a winter wonderland. This...... Read More